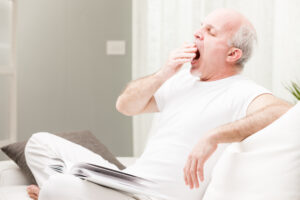 One morning, I yawned and heard a distinct pop in my right jaw. Yikes? Is my head falling off? My face frozen and contorted, I had dislocated my jaw! I began to panic.

I wanted to run from our bedroom, elbows flailing, as I grasped my face to keep my head in place. (Think Edvard Munsch’s The Scream.) I needed a doctor, but I had never heard of an ear, nose, throat and jaw doctor. Unable to move my unhinged mouth, I couldn’t communicate to my wife who was sleeping next to me. If I were to reach out and shake her awake, there was no telling how she’d react when she saw me. A jury would call it self-defense.

I grabbed my jaw and began to wiggle and shift it slowly and gently, as I tried to locate the groove. This had always worked with a bicycle chain and whenever my garage door slipped off its tracks. After some painful shimmying of my head parts, I managed to position my jaw back into place.

For three days, I hid my condition from my wife while I consulted Dr. Google. Several times a day I yawned too widely and knocked my jaw out again. With each incident, I trotted quickly from the living room to the bathroom to keep my hideous disintegration from my wife. She thought I had developed a bladder condition. Behind the locked bathroom door, I would gaze at my misshapen face in the mirror, grab hold, and then eventually slot everything back in place like giant Lego pieces.

It didn’t take long to learn I had TMD–temporomandibular joint dysfunction–a condition that can hit people of any age, though I read that most people affected are under forty. I announced to my wife that I had a “young person’s disorder.” She smirked. I consulted my GP, and he referred me to a dentist who specialized in my condition.

The dentist told me that if it got any worse, I would need complicated oral surgery. After several visits, x-rays, and measurements, I was finally fitted with a custom-made retainer which I am supposed to wear at night for the rest of my life. I have been able to keep my head in place and I have had fewer episodes of detachment. At least in the physical sense.

On the plus side, my wife says I look fourteen.

Michael Riordan has taught in the U.S., Australia, Singapore, and China, where he was professor of writing and film. He was co-founder and director of Singapore-based Creative Action Now, an English language school. His work can be found in Short Edition, Consequence, Epoch Press, Front Range Review, Tether’s End, and elsewhere.