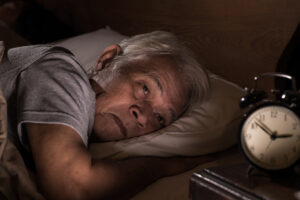 Maybe it’s the anxiety of waiting for a vaccination or just the general angst of waiting out a pandemic, but either way, I’m ready to try some Sominex (doubtful they still make it). If you’re old enough, you might remember their jingle. “Take Sominex tonight and sleep. Safe and restful, sleep, sleep, sleep.” That little ditty is still effective. You almost want to lay your head down and take a nap after listening to it.

The more serious issue is what baby boomers may be doing to themselves to get some quality sleep. There are warnings that alcohol consumption is way up and it stands to reason that various sleep aids such as ZzzQuil, Luna and Nytol are experiencing a big bump in sales. Likewise, CBD products are getting very popular for the supposed benefit of reduced anxiety.

I suppose you’ve heard that we should be getting 7 hours of sleep a night. Who was getting 7 hours even before the pandemic? Six is good, hell, I would take 5. The creepy aspect of this sleep deprivation is that we really don’t know how much sleep we’re getting. Looking at the clock over and over throughout the night does not prove that you were not sleeping in between time checks. How many times have you heard yourself say, “I didn’t sleep at all last night.” If it were really true, you would be in a zombie apocalypse movie by now.

Is this sleep deprivation issue really about the pandemic or is it a natural consequence of getting older? The National Sleep Foundation found that 35 percent of Americans report their sleep quality as poor or fair. Boomers spend less time in deeper stages of sleep and our circadian rhythms change, causing us to go to sleep earlier and wake up earlier. Their advice is to shoot for the same bedtime and wake-up. No TV or electronic devices (that’s going to be tough); no eating within 3 hours of bedtime; no caffeine after 3 p.m.; and don’t stay in bed if you are not sleeping.

All this talk about sleep is making me drowsy. Oh yeah, they also recommend naps be limited to 20-30 minutes. See you in my dreams.

Jay Harrison is a writer and creative consultant at DesignConcept. His mystery novel, Head Above Water, is available on Amazon and Kindle. You can also visit his author page here. 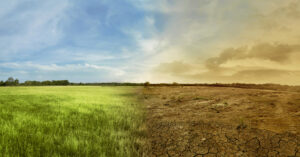 We Aren’t the World. We’re Just Renting the Place.

Coca-Cola’s 1985 smash, worldwide classic, “We Are the World,” was a brilliant, emotional call to action to help solve the world’s connected problems, starting with aid to impoverished people “barely living” in Africa.

But viewed in the lens of climate change, it incorrectly promotes our human-centered planet because, “We aren’t the world.” We share it with every living plant and animal.

As Kristy Lynn points out in her New York Times article, Earth Is Not Just a Human Playground, we affect the world and our actions have consequences, none so dire as the existential threat of climate change.

We act as if the world were here only for humans and not that we live in an interconnected world where every living thing depends on everything else.

If you’ve ever been stung by a bee, this momentary intrusion of nature into our lives is an annoyance and painful.

“Damn bees. I’d like to kill that bee, and the rest of the bees on the planet.”

Yet, a third of the world’s production of food depends on bees and other pollinators.

As Lynn points out, “If Earth were only for humans, why would it be constructed that humans rely on other parts of nature to survive?”

The earth, our home, isn’t just about us, it’s about all of us—every living thing on the planet.

So, every little thing you do to reverse climate change, even the smallest actions, like turning off a light, taking a shorter shower, or buying second-hand clothes to support sustainability, has an effect on everything else.

At least, that’s what the bee told me, shortly before he immersed his stinger in my left arm.

Jack Goldenberg is way more than a proficient copywriter. He is also the creative director at Einstein da Vinci & Goldenberg and you can get in touch with his inner adman at 10 Minutes of Brilliance.

I had my annual physical the other day…Oops, you’re supposed to call it chronic review or Medicare won’t cover it. So, during my ‘chronic review’, when the doctor looked at my bruised bicep, he paused and asked, “What the hell happened to your arm? Did you fall or something?”

I started to explain, but then realized what it might sound like. If he thought I was the victim of spouse abuse, he might feel compelled to report my wife. “Yeah,” I mumbled, “stumbled into the wall a couple nights ago.”

Here’s the backstory. It all started three months ago when I went to get an eye exam…they make you do that if you want to replace scratched lenses, even if you don’t think your prescription has changed. Huh! The sweet young thing did the usual: ‘Which is better? One? or Two?” Then bending over her hand-held tablet, crunching numbers and bringing up screens, she muttered through her Covid mask. “You have dry eyes.” Mutter…mutter.

Never used to have that problem. I teared up regularly for the usual occasions—funerals, birth of my kids, banging my thumb with a hammer, even laughing too hard. And while I never bought into the ‘men don’t cry’ myth, I do reserve judgement as to when to let tears fall. But these days, the optometrist was right. I don’t tear up as much or as easily. Maybe I’ve seen too much. Become cynical and hard boiled. A crusty old man. The only surefire way to bring tears to my eyes is to dice an onion or go for a long drive with my wife.

Let me explain. It’s when I’m on a long drive that I really notice the change in my vision. Sometimes, I can hardly make out freeway signs until I’m practically on them. I’ve learned it’s all about the ‘tear film’ I’m lacking that keeps vision sharp. Tear drops fix that. But who can stop every half-hour to put drops in your eyes? We’d never get anywhere between stopping for bathroom breaks and lunch and gas…aargh.

So, back to the chronic exam, what I couldn’t tell the doctor was, whenever I noticed highway signs blurring, I’d ask my wife to pinch my arm…hard. And after a couple hundred miles, it really brought tears to my eyes. Mission accomplished. But would he understand?