It’s official. The 70s are going to be the best time of your life. Even if AARP didn’t come out with a recent survey that indicated people in their 70s were the happiest, I myself was feeling pretty darn happy, just so you know.

You can click the link for the AARP/National Geographic “Second Half of Life Study, but the bottom line is that people in their 70s are in one description, “doggedly optimistic” about their life and the future. Keep in mind, these people were interviewed post-COVID and they are still thinking positively about their lives and what’s ahead. Thirty-four percent of adults 80-plus and 27% of those in their 70s report they are “very happy,” compared to 21% of those 60 to 69, 18% of those 50 to 59 and 16% of those 40 to 49. According to the survey: 90% of respondents in their 70s said they were happy, compared with 81% in their 60s and 80% in their 40s.

Some observers have noted people in their 70s might be referred to as Generation X, for the lack of attention that they receive. It’s all about people in their 60s who are on the cusp of retirement, or people in their 80s who are beginning to face physical and cognitive limitations. You could say we’re the Rodney Dangerfield Generation, since we don’t get any respect.

How do we account for this extraordinary level of happiness? The simple, unscientific answer is that we’re boomers. Our generation is known for its sense of optimism and willingness to explore new things. These are people who flocked to San Francisco for the Summer of Love and hitchhiked to Woodstock without much more than a few dimes in their pockets. Now we are hitting the road again to see and do things we’ve not done before. As one observer put it, the seeds of being boomers in their youth are now growing into a sense of tranquility that other generations can only aspire to gain.

I congratulate you if you are 70+ and reading these words. You’ve made it, found more happiness than most, and can just focus on enjoying the years ahead. For those not yet 70 –  the best is yet to come. 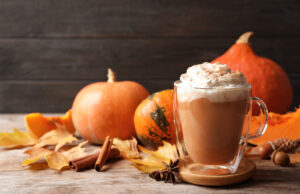 For some it marks another school year, the start of football season, or the turning of time toward the holidays. It’s my favorite season for many reasons other than school (done with it), football (never have liked it), or holidays (enjoy them for the most part). I love autumn because it’s the season of my birth, and it’s a colorful, crisp time of year after the heat of summer. The skies are clear, the temperatures mild, apples and squash are in abundance, and the trees are in their glory. Mostly, though, I love it because it’s pumpkin spice season, as named and promoted by the marketing gods. Yes, I’m one of those people. I look forward to it every year.

The craze started in the 1990’s among coffee lovers when coffee shops debuted pumpkin spice coffee, followed by the famous pumpkin spice latte at Starbucks introduced in 2003. Since then, the flavor has spread like wildfire into many other food products, and it has become the topic of speculation about what’s next – pumpkin spice suppositories? Pumpkin spice oil at your next oil change? I love the flavor in coffee, tea, yogurt, and waffles, and the scent of it in my body wash and deodorant. This year, in my stroll around the grocery store aisles, I saw pumpkin spice Cheerios, Goldfish, Oreos, and peanut butter. I’m happy with the original Cheerios, cheddar cheese Goldfish, and if I ate them still, the original Oreos. But pumpkin spice peanut butter? I might give that a try. There are also pumpkin spice pop tarts, Jell-o, granola, and even pumpkin spice Kit Kats.

Researchers at Johns Hopkins University have found that we are susceptible to all things pumpkin spice because the scent of this autumn flavor, comprised of nutmeg, cinnamon, cloves, and ginger, triggers familiar memories that create nostalgia about the upcoming season. Psychology Today echoes this, saying the primary reason we are attracted to pumpkin spice is its association with positive memories and experiences. It makes sense to me. Social factors also influence the pumpkin spice craze. Because these products are only available for a limited time in the fall, customers are compelled to jump on the bandwagon so they don’t miss out.

So as I open my first pumpkin spice yogurt of the season and taste that sweet spice, I know there are reasons why I love it the way I do.

Lee Stevens is a writer, a weaver, and a sometimes wise elder enjoying autumn in the mountains of Western North Carolina.

“Hey, honey,” my wife said as we barreled along M53, “There’s a park up ahead. Sandy Pines. We’ve never been there.”

“Let’s stop for lunch,” she suggested. “The site says there’s a nice little waterfall near the picnic area.”

There is, I recalled. My girlfriend at the time had my mind in a cloud of cotton candy. But yes, there was…is a waterfall, still, I presume.

So, we pulled in. Lunched. Then walked the acorn strewn path to the railing overlooking the waterfall. I felt strange. Like I was cheating, perhaps because I was not sharing my side of the story, the memories running behind my eyes with each step.

Not everything was the same. There was a kind of dock or station, now, weatherproof boards, worn and warped, not plain gravel and dirt. The railings were shiny from the sunscreen forearms of a thousand visitors, not the bark covered poles from my time. I didn’t realize how much I remembered, how golden that moment had been. How painfully shortened when she dumped me on the way back to town.

So, yeah. The same but different. Changed. New boardwalk around the swampy ground near the falls. Same damp, misty, mucky smell…smells yank you back. More people. Maybe there were a lot of visitors back then. But I guess I just didn’t notice them. And I can’t remember where she lived when I picked her up. And how long we had been dating. But I did remember where I first met her at a friend’s cottage and we played king-of-the-mountain in chest-high water and I could hardly move my neck and shoulders for a week after.

So, okay, a trial run on the way to the real thing. But even at the remove of all these years, is it worth sharing those splashes in the muddle of memories with my wife? Nah. Not so much. Not that she would be jealous, or feel diminished somehow. It would just be irrelevant, too long ago or maybe just too personal. I mean, some memories should stay in the shoe box of photos in the back of the closet right behind the newer one still being filled.

2006. Remember where you were or what you were doing? I had to stop and think about where I was living and working. Oh, right. I was the Creative Director at DesignConcept and had this idea that since everyone was blogging about something, it might be a good time to create a blog devoted to being a baby boomer. It had a funny name at first, but then we settled on BoomSpeak because that seemed to fit for a blog that would give boomers a voice and an opportunity to express their thoughts on growing up and aging as boomers. We thought it might make money by selling ads. Ha! Another fantasy crushed!

Thanks to longtime contributor Harpeth Rivers for suggesting that we put out a collection of the best of BoomSpeak. As I note in the subtitle, I think they are all great or I would not have put them in the blog in the first place. Thanks also go to all our faithful readers and contributors for sticking with us for the long haul, and to Jim Fanzone @ DesignConcept for the cover art.

It was surprising to scroll through our online archives and realize how many contributors we have had in sixteen years. We selected what we thought were the best posts and that was not easy — there were so many gems. You have our most sincere gratitude for selflessly allowing us to share your words and thoughts.

We hope you find this BoomSpeak anthology entertaining, and thanks again for coming and going along for the ride.

If you ever contributed a piece that we published, you might find it in this anthology. A sneaky way to get you to buy the paperback or Kindle version?? Yeah, so what? It would be the first time there was any monetary profit to putting out this ezine for 16 years.

Click here to order your edition, and thanks again for being part of the BoomSpeak experience. Much appreciated.