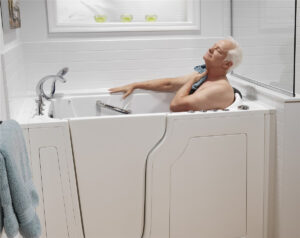 We’re not moving. Do we have to say it again? You can’t make us.

Two out of 3 adults aged 55 and older plan to stay in their current homes and age in place. Quite a departure from the retirees that preceded us. They largely downsized or moved into one of those “adult” communities.

It’s not helping the housing shortage either. Thanks to rising home values, many boomers can afford to stay right where they are.

It helps if you’re in a reasonably sized house all on one floor. Some boomers are going to be facing some substantial renovations if they hope to age in place. When AARP surveyed homeowners last year, 70% of them indicated they would need to modify their bathrooms to reduce shower steps and add grab bars. The same percentage indicated that their homes had other significant accessibility issues, both inside and out. Making those renovations could entail a substantial cost, but on the upside, it will make the house more valuable to the next batch of boomers when the time comes.

Hell, we’ve already replaced almost all the doorknobs with levers, so we must be halfway there. Now we just need to screw handrails to every doorway and hallway, and we will be set. Wait a second. We will need brighter lights too. Oh, yeah, and one of those smart thermostats so we don’t have to mess with little dials. And smart showers and smart doors and blinds. Check. And one of those bathtubs with a door on it. Check. Medication reminders. Check. Medical alert for fall detection. Check.

This is starting to add up to some serious spondulix! But that’s okay. Because remember we’re not moving. They can’t make us. 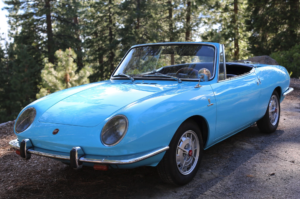 My first car was a baby blue Fiat convertible. Wow! It was absolutely ideal. It was eye-catching, small enough to park anywhere, and it cost nothing at the gas pump. I think I could fill it up for $1.25 – is that really possible? I loved that car.

I actually learned to drive in it, thanks to my boyfriend at the time who was a Middle School teacher and VERY patient. I was 20 or 21. Although I had passed my driving test at 17, the trauma of the stick shift and clutch in my mother’s Cougar was too much for me. Then I went off to college where I didn’t need a car.

But the next summer, while my mother went to New Hampshire with her husband-to-be, she left us the use of her Jersey shore apartment and said I could have the car if I wanted it. I really had no choice but to try to learn to drive again. I felt so glamorous and grown up. I remember the thrill and the fear of it all – actually being scared at stop signs and left turns. Parallel parking! It was such a triumph.

That fall I moved to Baltimore where I needed a car. I also acquired my first cat – Stash – a distant cousin to Morris the Cat. Stash would ride with me in the passenger seat with the top down, sitting up like a dog or even a person. When I parked and left the car on a busy, noisy city street, he would stay seated and wait patiently for me. I guess I was lucky that nobody ever kidnapped him. When walking in the woods, he would follow at my heels as if he were on a leash. I loved that cat just like I loved that car. Years later, after my daughter was born, Stash disappeared never to return.

D L Hudson lives in Santa Fe and is an animal lover and aspiring artist. 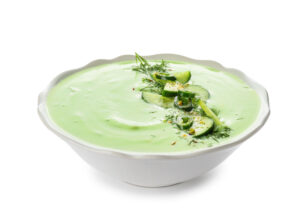 I can feel the cold in my bones this autumn day even though I have the heat turned up beyond my husband’s mandated 68 degrees. So I’m wearing his old cable knit sweater and cradling a cup of tea, letting the steam shroud my face to warm me up—it’s not working.

It’s lunchtime, but although my stomach grumbles like an alarm, I can’t be bothered to eat. I really fancy the chilled cucumber soup my husband would make at the height of summer. Of course, he grumbled that the cucumbers we bought from our local Stop and Shop never tasted green enough, and I would laugh and ask, “What does green taste like?” Now I know it’s the freshness that fizzes on your tongue like a new adventure or the soothing notes of our garden where the hollyhocks grow as high as a wish. Just thinking about it, I can smell the spicy chili jam he spooned on the top to add heat and intrigue.

That soup was us–in a bowl, his calming green, and my crunchy red. Swirled together, we were the perfect combination. And he always knew when to make it for me. Just as the darkness was ripening on the branch about to fall, he would say, “Would you let me woo you with my cucumber tonight?” and then make a Benny Hill-like gesture that always made the darkness blossom into an apple.

I look in the fridge and see I have all the ingredients but one to make the soup for myself. So I peel the cucumber, open the gloopy yogurt and pour the organic chicken stock. I hear him say, “It’s worth paying the extra for organic.” The blender is as loud as a car crash.

I serve it in one of my favorite bowls; it has a chip where he knocked it against the tap. We had bought it on a trip to celebrate our twentieth wedding anniversary, so I wouldn’t let him throw it out. I spoon the chili in a circle, and when I taste it, the soup is much too salty, but I scrape the bowl clean anyway. I brush away my tears as I look at a photo of the two of us that last summer and say, “It’s not as good as yours my love but I’m going to keep on trying.”

I tend to be wary of online articles that try to snag your eyeballs with such wonders as “10 Ways to Lose 25 Pounds” or “12 Neighborhoods In (insert your town here) Where You Have a Good Chance of Getting Mugged” or “5 Ways To Be a Better Lover.”

It’s not the topics per se – it’s the way they have quantified it that gives me pause. Ten ways to lose 25 pounds when 2 or 3 ways that really worked would be sufficient. But I digress. Often. Unrepentantly.

There. That’s the one that stopped me short. The gist of the article is that when boomers hit certain milestones such as a parent passing away or turning 65 or some other life transition, it can trigger divorce action.

Here’s some reasons why. Life expectancy is increasing. Do you really want to spend another 25 years with him/her? Hmm, at least one of you is thinking. Hadn’t really thought about that one.

How about those boomers on their second marriage? Yeah, you. If the first marriage didn’t work out, there is a higher probability that the 2nd might not either. The US Census Bureau keeps track of this sort of thing and they say 60 percent of second marriages and 73 percent of third marriages will end in divorce.

Let’s pick up the pace here. The kids are gone and on their own, I’m out of here! Heard that one? How about we’re set with our assets so let’s split them and then split. Or you’ve tried a half dozen communication strategies and none of them are working, otherwise known as falling out of love.

Some couples just don’t want the same lifestyle anymore and their values have changed. Why pretend that you agree? Adios.

Lastly, the relationship has become abusive, verbally, or physically. Sorry if you didn’t see that very big downer coming, but it is a real reason why many boomers end up in divorce court.

Now you can see why I tend to steer clear of articles that open with “8 Reasons Why…” You are better off reading the ones that promise to tell you the “50 Best Places in the U.S. To Retire.” It’s just their way of forcing you to look at 50 online ads for stuff you don’t want, but at least you won’t end up in divorce court.

Unless you can’t agree on the best city in which to retire. 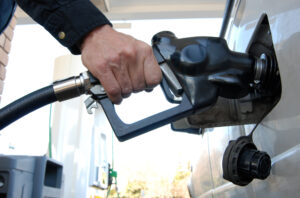 I was waiting in the left turn lane of a four-lane road for a break in the long line of facing traffic. Destination: a gas station that charged two cents less per gallon than the station two lanes over on my right. My granddaughter looked up from her book and asked, “Why are you turning here, Gramps?”

Pointing out her window, she added, “But there’s a station we could have just pulled into on this side of the street.”

“It’s cheaper at this one.”

As she leaned over to glance at the gas gauge, I had a sudden premonition that she would be framing up a word problem. See, Sarah’s a middle-school math whiz…always has been quick on the draw, numbers wise. “We only need half a tank…what?…ten gallons maybe?”

“Yeah, I want to top-up before we head to the lake.”

“Yeah, you bet. Every little bit counts…” I’m not sure why, but I felt like I had to explain myself. “I’ve been doing that…going to cheaper priced gas stations since I first started driving.”

Sarah nodded. More cars whizzed past. Finally, she asked, “What was the price of gas back then…which would have been, when? In the fifties?”

“Yep, when I was in high school. Gas was around $.25 a gallon. And so, you see,” I announced, triumphantly providing the answer to her math problem before she could solve for it, “if you had a favorite station that sold gas two cents cheaper than the major brands…on a ten-gallon fill-up the twenty-cent savings would get you ten gallons for the cost of nine. One free gallon!”

“Huh! That was cool,” she allowed as we pulled up to a pump.

As I inserted the nozzle and punched the lighted tab that read REGULAR $3.25 9/10, she sidled up next to me and leaned on the car. I pointedly looked across the street at the competitor’s sign—$3.27 9/10. She needed to hear more. “You could get a Coke and two Baby Ruths with that saved quarter and still get change back.”

Sarah raised her chin, nodded, acknowledging, assessing. “Okaay. Hey, speaking of Cokes, Gramps, could I have a buck for the machine inside?”