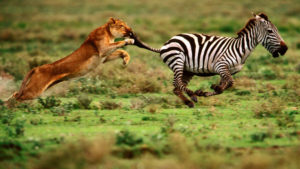 Have you noticed a strange red mark on the top of your foot? Do you think you’re seeing floaters on your eyeball more often? Do you feel lower back pain only hours after getting up in the morning, and you haven’t done anything physical? Does one of your back molars hurt when you chew on that side? Your knee joints ache? Your neck hurts? Numbness in your shoulder?

Congratulations! You’re aging. The thing is, mentally I’ve begun to think that everything is something. And worse, that the something is going to kill me. Experts like to say that one of the challenges of growing older is knowing which pains we need to pay attention to and which ones we can ignore.

I’m going with the contrarian tack. I’m thinking that any one of these pains is going to kill me and as a result I feel more sanguine about the whole aging mess. It feels a little bit the zebra trying to outrun the lion and after exhausting itself it just gives up and goes down. Well, maybe that’s not the best metaphor. I don’t expect to be torn apart by a predator cat, but I know I’m going down some day and it’s totally impossible to predict which pain or bizarre symptom is going to mark the beginning of the end.

I’m not going to blithely ignore serious ailments. Even zebras would go to the doctor for routine ailments if there was a veterinarian around out on the savanna. It would be foolhardy to ignore some of the more obvious signs of cancers or dementia and I’m certainly not advocating willful ignorance. The reality for all of us is that something that starts out small is going to be the thing and there’s not much we can do to alter that. We can be watchful, exercise, eat as well as we can and live life to the fullest. And isn’t getting the most joy out of life while you can the best revenge? I know…tell that to the zebra. 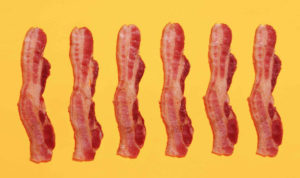 During the first couple of months after I retired, my husband and I were driving each other nuts, what with me wanting him to eat healthier and live longer and then his raging indifference to my loving intentions. So, I thought, fine, you want to die, let’s get this show on the road, and I gave him “Bacon of the Month Club” for Christmas.

He would receive a monthly shipment of bacon for three months courtesy of Zingerman’s. I would have done the whole year, but that seemed too obvious.

I like bacon, but most of the time, I’m like, no thanks, I’ve already had cancer. Until delicious specialty pork products started arriving at the door, I wasn’t even tempted. But now there was pressure.

The first shipment was a pound of Nueske’s applewood smoked bacon from Wisconsin. The package included a keepsake binder with articles about bacon and the people who make it, “A Pocket Book of Bacon” and a pig magnet for the refrigerator.

In hindsight, I can see bacon helped us bond through a challenging transition in our lives. Whatever was going on – me in bed at night, worrying about what happens if the North Koreans bomb us and ruin my retirement and him worrying about me being awake worrying about North Korea.

But then it’s morning, the sun is glorious, the birds are chirping and wait, what is that other sound? Could it be the siren call of bacon?

One morning I took a picture of two simple slices of bacon on a plate and posted it on my Instagram account. I don’t get tons of Instagram traffic, but bacon is my most popular post to date. I look at the number every couple of weeks, and I report to Dale that bacon, of all my posts, is still in the lead. He laughs every time. The picture of me bald after chemotherapy is a heart-tugging second, but it’s not bacon.

We’re adjusting to our new lifestyle. I gave up pestering him about what he eats. Besides, he kind of came around on his own. Our membership in Bacon of the Month Club had expired, and one day he said, you know, that was fun, but we shouldn’t eat so much bacon.

I let him think it was his idea – a trick I learned at work.

Old people. There’s no getting away from them anymore. The world is overrun with them these days. I look at their faces noting the lines and wrinkles, blemishes, spots, markings. Their faces show up everywhere I go. They populate group meetings, writing workshops, supervisors meetings at work and the personal ads on the online websites I frequent. And of course there is that particular squinting, gray haired, old face that stares at me from the mirror above the dresser in my bedroom.

On the edge of that mirror, I have pasted photographs from many stages of my life. Cute pictures of me with fluffy brown hair, smiles with soft dimples on a smooth face. They are familiar and comforting pictures. Unlike the frowning, wrinkly, chubby face I see in the middle of the mirror now. A face hardly visible without my glasses.

These days every situation comedy on TV has an old person to laugh at. There are the Mr. Magoo type jokes about old people walking in exits and out entrances and bumping into things with cars, shopping carts or their walkers. There are the sexual jokes that make young people squirm at the very thought of flabby old bodies rubbing up against each other.

I am trying to cultivate a love for old faces. I am trying to see beauty in the life experience manifested there. I’d like to take up sculpting and create out of clay a lovely, warm and gentle face full of lines and crevices that radiate an inner beauty, a joy in the living of a long life. Perhaps the grace in aging can be found in art before it can be found in life.

Madlynn Haber is a writer in Northhampton, MA and has been published in the anthologies Letters from Daughters to Fathers and Word of Mouth Volume Two and in Anchor Magazine