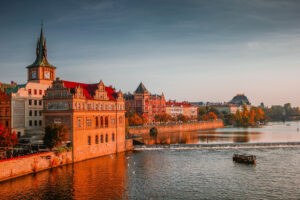 My father’s name was Egon. Pronounced egg-on. He grew up in Czechoslovakia, so he pronounced a lot of his words wrong, or so I thought as a kid growing up in NJ. I tried to help him with that, and in return he helped me spell Czechoslovakia. I was the only kid in my class who could. We’d go to the International House of Pancakes, me and Egon, and sit across from each other in the booth, like nations at the table.

A language is a dialect with an army, say the linguists, and while we waited for our pancakes I’d drill him in pronouncing all the different syrups, and he’d drill me in C-z-e-c-h-o-s-l-o-v-a-k-i-a.

He didn’t know much about sports. He thought John Havlicek was Czech. But I said no, he’s from Ohio. He thought a home run was something you did when your mother forgot to pick you up after your baseball game.

He died when I was 14. Many years later, after the Berlin wall came down, I visited Prague. It was a sort of home run, to my father’s home, in my father’s honor. They suggested I visit the Castle but I was more interested in the little things, like the doorknobs, which were mostly levers instead of knobs. And the “pater noster elevators” which were left over from Communism and had no doors or buttons and never stopped moving so you had to leap in or leap out when they got to your floor. And the squirrels which were mostly red or black instead of gray. And the blue streaks of the thieving socialist magpies with their clicking metered phrases, which reminded me of their cousins the American blue jays back home. And the fact that everything in Prague just seemed a lot more substantial, the bread for example, and the soups, and the eyebrows of the grandmothers, and the beer, and the coffee, and the buildings, and the rooftops which were mostly red instead of gray. And the heft of the coins, and the blue of the sky, and the beauty of the women, all those beautiful substantial Czech women, none of whom, I’d have bet my return ticket, was headed for the Castle or the Old Jewish Cemetery.