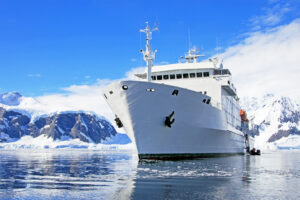 BiPolar. That’s what they call people who have traveled to both the north and sound ends of the Earth. No surprise – you must be a bit manic to even think of going there.

It was the experience of a lifetime.

Antarctica spread before us, incredibly beautiful – a world of ice, penguins, and life. Our winter is their summer, so my husband and I left the snow at home and traveled to the snow at the bottom of the planet. We boarded the Lindblad/National Geographic expedition ship, Explorer.

No one lives in Antarctica. Instead of visiting towns, we hung out with the penguins, and watched whales and 1300-pound seals frolicking among the ice floes.

I was never sure who was watching who!

A few years later we had to head north to the Arctic.

Once again, we traveled on the ice-breaking expedition ship, Explorer. We started in Iceland and followed the Viking route to Greenland. It was nothing like I expected.

Ironically, the names are mixed up. Iceland, which has more people, trees, and wild geological formations, is far greener than Greenland. Greenland is an autonomous country, covered by the second largest ice sheet in the world (the largest is in Antarctica). It’s about 80% ice, although that is quickly shrinking with climate change.

Greenland is Earth’s largest island with mostly barren, inhospitable land. Most people live outside the ice sheet, along the fjord-lined coast. Today about 56,000 people live in Greenland; Nuuk, the country’s capital, is the smallest in the world with 13,552 people.

Greenland is a mix of the old, the traditional, and the modern. There’s internet and television; motorcycles, cars, and trucks; and Viking ruins, small museums filled with very old artifacts, and reconstructions of the past.

The island is a magical place. Greenlanders are incredibly friendly. In ancient times they believed in spirits like Qivittoq who was exiled into nature. One of the most beloved spirits is the Mother of the Sea who watches over the animals. Today she’s a symbol of climate change and keeping the oceans clean.

We returned home, proud BiPolars, with a deeper understanding of our planet.

Then Covid grounded us.

We’re still determined to see all seven continents. We’re also committed to preserving the beauty of our fragile Earth. Climate change is real, the ice is melting, and seas are rising. It’s up to all of us to help Earth survive. Whether red or blue, support those working to protect the planet, stop climate change, and make sure that there will be more BiPolars like us.