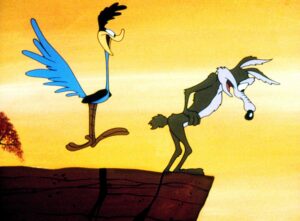 George of the Jungle? The Jetsons? The Roadrunner? Huckleberry Hound? Tom and Jerry?

How can any self-respecting baby boomer forget all the hours we logged in front of the TV (mine was black and white) watching cartoons on Saturday morning?

No one was worried about where we were or what we were up to as long as they could hear the TV was still turned on and we were laughing. Unsupervised time to ourselves to indulge our appetite for dogs that could talk and coyotes that could order explosives from the Acme Company. What could be better than that?

But first, we needed to slurp down sugar-filled cereal. Then we planted ourselves in front of the set and didn’t move for hours. Who knows what our parents were doing, but they were most likely relieved to have time to themselves and not worrying about what we were up to.

For me, a few hours of toons was followed by my favorite westerns. Wild Bill Hickok, Roy Rogers, Hopalong Cassidy, the Cisco Kid, and don’t forget Gabby Hayes.

The good news is that all that TV surfing was followed by outdoor play where we used our imagination (spurred of course by what we had just watched on TV) to invent our own play scenarios. Once again, no one worried about where we were or what we were doing. That is at least until someone went back into the house with a scraped knee or some other minor injury.

Sadly, for the generations that followed us, the Saturday morning fun ended when the networks realized they were not making much revenue from kids programming. They turned instead to sports and news while cartoons moved to after-school slots. G.I. Joe and Thundercats took over and they were really just half-hour advertisements for toys. On top of that, Congress decided to legislate more educational programming for kids. The ride was over,

But now kids can watch cartoons whenever they want via streaming services. And on their phones for crying out loud!! How can you miss the group watching experience if you’ve never experienced the pleasure to be had from that communal fun?

It’s some consolation that baby boomers can feed their nostalgic jonesing by going online where you can find just about every cartoon you ever watched as a kid (search YouTube for Looney Tunes and you’ll see what I mean).

Next thing you know, you’ll be Googling “penny candy.”