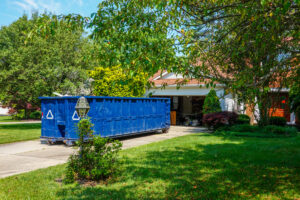 Recently a long-time neighbor passed away. His family put a nine-yard dumpster in his drive…actually it took two of them to clear his house. A close friend died. There was dumpster in her driveway as well. Some thoughts…

In war time, a gold star banner in a front room window meant a soldier had died. Black arm bands meant someone had died. These days, a nine-yard, open-top dumpster in a driveway can also mean someone has died. The decedents are making decisions about the former’s left-behinds, the walls of books and bed clothes and arm chairs and drapes. Should some go to Goodwill, the library, the church’s second-hand store? Maybe a garage sale would slide the detritus into the slip stream of what we used to call ‘alley pickers’ and now ‘recyclers.’ But sometimes the grandchildren, even their parents just want to tear down the walls of stuff that have piled-up to form gramma’s castle, demolish the ramparts that surrounded her. They have lowered the drawbridge to a dumpster with its hungry maw swinging wide for the raiders to form a bucket line passing along yellowed board games, baseball bats and ruptured-gut tennis rackets, and clothes on hangers, and books in boxes and flower pots and bedspreads faded and lumpy—pillaging a lifetime of memories in paper and wood and cloth. If you know how to read it, it’s a sign to the neighborhood that someone among them has gone.

Understood, it’s not the same as purging before relocating. That’s a sign of moving on like a young couple relocating for work or getting a bigger house to accommodate a growing family—a positive hopeful sign. Nor is it like an elderly couple scaling back before settling into more confined quarters in a senior residence—removing accumulated clutter for a simpler existence.

Some dumpsters in the driveway, for those who know how to identify them, are like mobile grave stones in an unmarked, urban cemetery…someone’s gone to a better place. Bow your head as you pass.