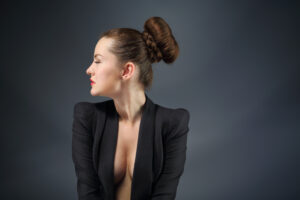 In the tony boutique, my fiancée selected several glittery garments and asked me what I thought of them before she tried them on. I asked her if she wanted me to be honest or to tell her what she wanted to hear. After some consideration, she chose the latter alternative and I told her that indeed I thought the garments became her and that if she wore any of them I would without hesitation be delighted and proud to accompany her to a fine dining establishment or a dance club of her choosing since I did not normally enjoy dancing or the people who frequent dancing clubs.

Naturally, this caused her to scowl.

“Emotional support is a two-way street,” she said.

I did not know what she meant by that.

Suddenly, a salesgirl presented herself with her plunging neckline and beehive hairdo and a waft of civet and heat. I felt my cheeks and ears redden as she told us that these garments, Italian made, verily radiated beauty. I thought it odd she put it that way. I could see from her blank gaze and lack of commitment to the pitch that someone, a manager or senior clerk, had scripted the line and she had spent time, perhaps in one of the dressing rooms, memorizing it.

For this I did not dislike her. We do our jobs as well as we can and hope no one in power tries to exploit us for whatever reason.

“What are you staring at?” my fiancée asked.

Er, nothing, I stammered.

Later, she accused me of staring at the salesgirl’s cleavage.

“How is it different?” I asked.

“I don’t know but it is, and you’re fucking sleeping on the couch tonight.”