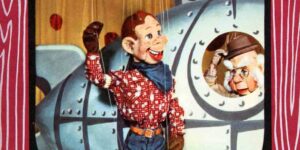 It would be hard to think of a more universal touchstone for baby boomers than the Howdy Doody Show. Say kids, what time is it? It’s Howdy Doody time!!!

There came a time when just about every local TV station had a kids show (the one I remember was Ranger Andy), but Howdy Doody got there first. And the show didn’t just entertain us boomers — it sold TV sets, cereal, lunch boxes and a lot of other products. Advertisers definitely took notice.

It all started with New York radio NBC affiliate WEAF, where Big Brother Bob Smith was the voice of a ranch hand on a show called The Triple B Ranch. He would greet the audience by saying “Oh, ho, ho, howdy doody.” Just the kind of nonsensical wordplay children love to hear, and love to repeat.

It was a short leap from there to the Howdy Doody Show and a whole cast of characters who lived in Doodyville. That named seemed rather benign when I was 7 or 8 years old, but in retrospect it sounds like a weird place to live. Buffalo Bob talked to the marionettes as if they were real, so even though we could see the strings on the puppets as plain as day, we began to think of them as real people. And what a collection of characters– Phineas T. Bluster with his flying eyebrows on separate strings, along with Flub-a-Dub and Dilly Dally. And the live characters were just as interesting. Chief Thunderthud of Kawabonga fame and Princess Summerfall Winterspring were pretty captivating. Clarabell Hornblow provided some of the slapstick and was played by Bob Keeshan, who most of you should remember later became Captain Kangaroo! He sprayed seltzer on everyone and we all laughed like the chuckleheads that we were.

I had forgotten that the show originally came on in the early evening, but I do remember that it came on just after Gabby Hayes. When the show came to an end in 1960, it was after airing 2,343 programs. It had its educational moments and teaching opportunities, but mostly I remember the slapstick, some goofy songs and the spraying seltzer, along with an unexplainable yearning for Princess Summerfall Winterspring (I began to think of her as pretty hot looking just as I hit puberty).

Who didn’t want to be in the Peanut Gallery bleachers when the Princess was in town? I guess when I was more interested in the Princess than the puppets, my Doodyville days were over, but I still remember them fondly.