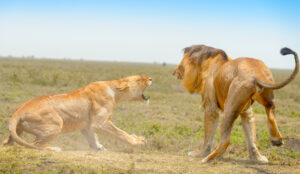 So, we’re on a game drive in the Tarangire National Park, Tanzania. Three of us couples in a typical van…the kind you’ve seen in a hundred documentaries and Wild Kingdom episodes. We’ve been circling the preserve for hours, our guide and driver, Lucas, short-waves with fellow guides on the same mission…turning the concept of a zoo on its head. Instead of bored animals stuck in cages ignoring us bipeds on the move, we sit in mobile cages while they move about, ignoring us. Every so often the radio squawks followed by a burst of Swahili exchange and we hare off in another direction to form an impromptu gathering, like outdoor concert fans at a rock fest, to gape at—a herd of elephants, or a leopard stalking a waterbuck or hyenas fighting and feasting on a wildebeest. Since two of us guys are of a ‘certain age’ and have been advised to keep hydrated we’re subject to frequent quick pit stops…made all the quicker for possible hostile fauna in the surrounding bush.

Anyway, Lucas just got another ‘heads up’ and we tore off to join a semi-circle of safari vans horseshoed around a pair of, what we soon came to realize were mating lions. The male slowly rose to all fours, stretched, eased over to the female laid out before him, yawned, climbed onto her back, assumed the position, twitched twice. The lioness viciously snarled and snapped at him. He got up, walked a few steps away and settled back down for a nap. Ten minutes later, he roused himself and repeated.

This time when the female nipped and growled, I said, “Honey, reminds me of us.”

“Ha! Not anymore it doesn’t,” she replied.

Everyone in the van laughed.

“No, No, I mean the snapping and snarling, part.” I counted five pairs of eyes on me. “Time was, we would aggravate each other over some damn thing or another. Have words. Sit and stew over hurt feelings forever until we eventually decided to make up. But now, when we annoy each other, we just let it out, doesn’t matter where we are or who’s watching. Slam. Bam. Then we get back to shopping, dining, or whatever else we were doing. Much better. Don’t you think?”

Lucas turned to look at me and stared—like a strange animal had just broached his rolling cage.