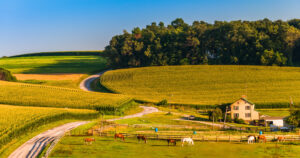 The summer of 1971, freshman orientation, was when we first met. June 2021 we are meeting again – half a century later.

During the isolation of pandemic, the tools of modern technology allowed us to reconnect by phone, email, and Facebook between her farm in Pennsylvania just west of Philadelphia, where my daughter lives, and my home in western North Carolina. As we reawaken and move about in the world again, I set out on a road trip to see them both. First stop is my daughter, where we spend several days rejoicing in our usual groove. Then I pack my bags to head home, with the planned stopover at Cathy’s farm.

Do you think we’ll have enough to talk about? I ask my daughter. You can always come back here if it’s uncomfortable, she replies. I enter Cathy’s address in Waze, hug my daughter close, and head out. I take the Pottstown exit off the Pennsylvania Turnpike, and wind through a scenic landscape until the disembodied voice tells me I’ve reached my destination. I turn left onto a long, thin gravel drive bordered by trees. I pass a pond, then a pasture where three donkeys and a horse twitch their tails at me. I see chickens pecking at the ground, a vegetable garden. Then, the farmhouse set on a small rise. My wheels crunch the gravel as I approach the back of the house, where the driveway ends. I get out, not sure which door to go to. She comes out the side door and we hug. Her hair is silver now; her face, like mine, lined with years of living. She shows me the house and the grounds, including where the ashes of her second husband are buried, and introduces me to her animals. We go to dinner, where we share stories of what happened to the people we knew back then. Like the young man I dated who became a priest and then died from melanoma in his late forties.

The next morning, she shows me a cookbook I gave her for her birthday in March 1972: To one romantic and practical girl from another I inscribed. Who knew we would be standing in her kitchen all these years later reading those words together. In the post-pandemic world, I’ve resolved to nurture relationships and focus on writing. As I head home, I know I’ve made a good start.

Lee Stevens is writing and reconnecting in Hendersonville, NC.