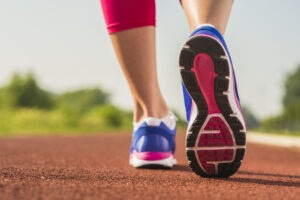 I’ve known the family for what?…thirty years? Neighbors down the street. A shout and wave when the guy walked by and some fried chicken at the annual block party. Nice that he—and what’s his wife’s name again?—invited me to their 50th anniversary party. I probably won’t know anybody unless they included some of our other neighbors.

Man, they really did it up right with a huge white tent and caterers. Food looks good and tons of people. I’ll just drop off my anniversary card and stand over here for a while.

I don’t know this young woman. Apparently, she thinks she knows me. What is she, maybe 35ish. Trim. Looks like she works out.

“I’ve always appreciated that you got me into running. Still do three miles a day and a marathon once.”

“I can still hear your voice on the last lap at State finals, “Reel her in. Pick up the pace. Can do. Can do, Sarah.”

So, her name is Sarah. Would’ve liked her for a daughter. I might have had to teach her to identify people better before engaging them in conversation. Still. She seems bright. Self-assured. Someone did a good job raising her.

“How do you like the party? All us sisters pitched in. I bought the beer. Want me to get you some?”

I shake my head, hold up my hand. Oh, so she’s one of the family. Do I remember a kid walking a dog? A beagle. Could have been her.

Sarah looks over to a gathering of three more women about her age surrounding a pale, gray-haired man, washed-blue eyes, hunched. She looks back at me. Checks me out. My blond-gray hair, blue eyes, standing taller than the other guy. Tanned. She looks at the coach one more time then back at me. She hunches her shoulders in a ‘oops’ gesture.

I reach out, touch her shoulder. “Were you the sister who used to run with your dad? Go past my house every so often?” Sarah nodded. “Well, I suppose you wouldn’t know this, but the sight of you two jogging got me off the couch. Been running regular ever since. So, thanks coach.”

She bowed her head at me, a confused expression between pleased and embarrassed flitting across her face, and left to join her sister.