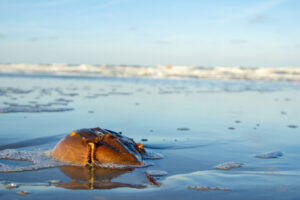 My hometown of Barrington, Rhode Island was a place where water was our playground and the creatures within and around it were our playthings. Some creatures we feared, like eels and toe grinders and biting horseflies; some we harmed, like the small jelly fish we threw at each other and the mussels we smashed on the rocks. In the woods, we feared a mythical group of mean boys we dubbed the Kids of the Path; at the water, we ruled as the Kids of the River.

The river smelled of salt and mud and things that died in the eelgrass and then washed ashore to bake in the sand under the midday sun. At the edge, at low tide, we hunted clams by walking barefoot in the soft mud, waiting for the small shoot of water, and digging down to capture the escaping mollusk, which we would then crack open and eat. We climbed on the slimy rocks that hugged the water’s edge, popping seaweed bubbles and gathering treasures to mix into magic potions with bayberries, discarded fiddler crab shells, salt water, and sand.

At high tide, when we preferred to swim, the shallows were ripe with horseshoe crabs the size of dinner plates. We were afraid of their horns that could stick straight up and pierce a foot, but also fascinated by their prehistoric creeping along the sandy bottom. There were fish that swam around us, and waving seaweed that stuck to our legs when we splashed around and swam from beach to dock to raft. The boys swam out to the sand bar where the blue crabs and the toe grinders lived, or all the way across to the opposite shore, their heads bobbing farther and farther away like buoys in the glinting sun among the speedboats and the sailboats. We girls would row a small boat to the opposite shore to visit the library and get Dusty Sundaes at the Newport Creamery.

We were semi-wild, unsupervised, and almost savage sometimes in our games, our daring, and our occasional harming of sea creatures. It was our summer playground, our compass point in a childhood that held space for adventure and raw joy. As we grew and went our separate ways in the world, where a couple of us would die young, many of us would find happiness, and most would live long, we would all remember the river.