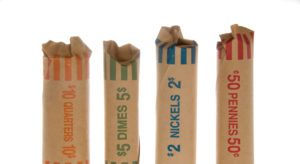 At the end of the day, my husband likes to drop all his change into an old plastic Atomic Fire Ball bin. A big one – something you would get from Costco or Sam’s Club. The bin was full, but we weren’t sure how to convert it to real money.

I looked into Coinstar but didn’t want to pay the fee. One can avoid the fee by getting an eGift Card, but Dale is a bit of a Luddite and suspicious of all things that start with a small e.

We’re doing it the old-fashioned way.

First, I went to the bank and asked if they accepted rolls of coins. They do. And they provided me with the flat paper rolls. When I got home, I separated the quarters, nickels and dimes. Dale asked what I was doing, and I said I was being nickled and dimed. Which is kind of true, because as it turns out, this is not how he would have done it.

Dale has yet to reveal his secrets to coin-rolling, but since I started, I think he’s extricated himself from any role in this fun family activity. That’s OK, because at this point, it’s like I’m on a mission from God.

So far, I have more than $300 in quarters. I’m out of quarter rolls and asked Dale what he thought about our next move. Should I take what I have to the bank and get more rolls? Or should we wait until we’ve finished and do it all at once?

It’s funny. We are so different, yet in some ways it’s like we’re the same person. Maybe that happens after 41 years. Anyway, we both blurted out, “Let’s do it all at once!” And we started laughing. Somehow, it’s exciting to see the grand total. Maybe that’s just how Luddites roll.

Of course, the real problem is figuring out how to actually carry in this pile of rolls without looking like criminals. Dale said criminals don’t bring stuff into the bank. They steal things from the bank. True, but there’s an armed guard at the entrance, and I can just see us holding some sort of parcel stuffed with coin rolls and the guard thinking it’s a gun or biological agent.

These things never go well for me. I can see it already. I’ll be on the ground bleeding out, and they’ll be apologizing to Dale for the mess and asking him if he wants it in $20s.