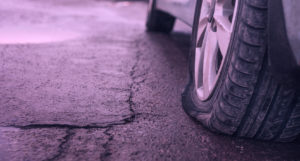 We were about half-way to the winery when the front right tire blew. The roads out there are relatively narrow, but Dale was able to find a wide spot on the side. Still, the car was not level, its right side tilted down slightly on the gravel ditch, and I didn’t like anything about this situation.

I asked Dale if he wanted me to call Triple A, and he said yes. Smart! I dialed the number and never spoke to a human. They texted me a link to a map that showed estimated arrival time in an hour. That’s when Dale decided smart wasn’t all it was cracked up to be.

The sun was blazing, and I sat in the ditch on matting we pulled from the car to access the spare tire, which is actually one of those weenie wheels. Dale wasn’t going to wait an hour when he could do it himself. This from the guy who is nursing a bad back. I sat quietly on my mat, sweating and brooding.

Dale got the jack in place and was able to raise the front just enough. He was struggling with lug nuts, when I saw the jack slip. I said, I know you don’t like me to comment, but you should be aware the jack is not stable, and it seems to me the car could fall on you.

Later, as we argued about what happened, I would apologize for trying to keep him alive. My bad.

He did listen to my report on the instability of the jack and stopped to reassess and maybe to get his breath back from the lug nut effort. Just as Dale started tinkering with the jack, a strapping young man in a pickup truck stopped to help.

It wasn’t until later in the evening that we began to deconstruct the events. I originally blamed Dale for the whole thing, principally because I had to deal with the Triple A drama while he played around with the tire. However, I realized mid-way through the argument I was equally culpable.

We talked about having control issues associated with retirement, work or lack thereof. We’re getting better at talking about it, and that’s progress. I like to think we both learned something about flat tires or possibly life, although I suspect I learned to say, “I’m calling Triple A.” I suspect he learned to say, “Oh, lug nuts, I had a little trouble last time, but I got this.”