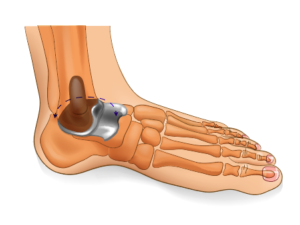 I’m coming up on my third body part replacement next month. So far, I have a dead guy’s ACL stitched to the ACL in my right leg, and an ankle made of plastic and some sort of metal alloy. Up next is a partial knee replacement that involves a piece of metal I’m told won’t dent but will definitely light up the metal scanners at the airport.

When discussing my upcoming part replacement with a twenty-something co-worker, she excitedly told me that her grandmother had the exact same surgery! A comment met with a blank stare from me (I’m not old enough to be a grandmother, right? Also I don’t have kids). Although I’ve only just passed the double nickel milestone, I must seem ancient to her. But I am determined not to feel ancient. These body part replacements are giving me a second chance at an active life that for many years was stalled by the pain and weakness of a severe bone break turned arthritic, a torn ACL, and the hereditary joint destruction caused by arthritis that kicked in when I was 17. I’m not going to lie—recovery from parts replacements is hell but the benefits far outweigh the short-term struggle.

With my new parts, I’ve been able to do lots of things that, for years, I couldn’t: roaming 445 acres of the Iowa State Fair trying nearly every food on a stick, walking my dog, doing squats, riding my bike, wandering through junk jaunts, jumping around at concerts and music festivals, sitting during a two-plus hour plane trip, hoofing it from terminal A to terminal C in Atlanta, or taking road trips without sharp pains and stiffness. My parts replacements have been some of the best money my insurance company ever spent. Thanks, guys.

I spent my twenties, thirties, and forties working, working, and working some more to get the career, the car, the house. It was like being on a hamster wheel, and I rarely did the things I’ve done since parts replacement. But some of my parts are showing wear and need maintenance—like the car and the house. It happens; it’s inevitable, actually. If my parts replacements put me on the same level as my co-worker’s grandmother, that’s ok. I’ll gladly take the replaced parts and do things I was dumb enough not to do when I was younger.