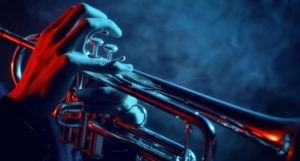 In the early 80’s, I was playing with the Bernie Pearl Band and one night we opened for Smokey Wilson at The Music Machine out on Pico on Los Angeles’ Westside. Smokey was a real showman; he fronted a 7 piece band with a horn section and sported a powder blue 3-piece suit with a cowboy hat to match. He’d hit the stage after his band warmed up the audience with two or three tunes.

In those days, Smokey traveled in a trailer. At some point during Bernie’s set, my girlfriend Lynda took him out there for a little taste. I don’t know how much of our set he actually heard but when we came off, he told me he liked my playing and invited me to sit in for his set. We had a drink at the bar and he said, “once the band gets going you come up with me”. We had a couple more shots and I asked him what key the band would be in when we hit the stage. He put his hand on my shoulder and said, “Son, I play so many keys”.

As we walked toward the stage, I still didn’t know. We passed the horn section on the way to my spot and, in desperation, I asked them for the key. The trumpet man said “F#”. F#! A lot of harp players don’t carry a “B” harp which is what is needed for cross position in F#. Smokey strapped on his guitar, grabbed the mike, looked at me and said, “take one”. We’re in F# and he puts the spotlight on me right out of the gate. But the trumpet man saved my ass. If no trumpet man, I’m punked in front of a full house. I tore up that solo and Smokey ignored me until his final song. It was ok with me because fitting in with a solid horn section is one of my favorite things.

Smokey’s gone now, but he taught valuable lessons for harp players that night: be prepared for the flats and sharps, beware of a guitar slinger in a powder blue suit and always make nice with the horn section.

For the record, according to L.A. bass player Ron Battle, that trumpet player was, most likely, Joe Campbell. This many years later, thank you Joe. Smokey will never know.

Rick Smith is a musician and harp player (that’s a harmonica folks) from Helendale, California.