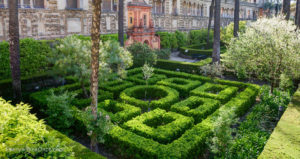 A man and woman from Nebraska celebrate the husband’s recent retirement by traveling to Spain. They think Spain is a unique choice over other possibilities—Caribbean cruise, tour of the Holy Land, National Parks by RV. They are somewhat surprised to arrive in Barcelona and find so many tourists and pseudo adventurers from so many parts of the world also visiting Spain. They form great herds of trudging pedestrians stampeding down Las Ramblas and shoulder-to-shoulder in the narrow labyrinthine streets of the Gothic Quarter pushed along past shops of Moroccan leather bags, jewelry from India, textiles from Persia, pastry shops, tapas bars, and paella restaurants, not to mention the recent immigrants from Syria, Africa, and Romania squatting on sidewalks and streets, vending key chains, brushes, combs, wallets, and knives on tablecloths spread over cobblestones, some standing forlorn, destitute, and disappointed.

The couple from Nebraska hold hands for the first time in years as not to get separated from each other as though holding hands might keep them both from getting lost or falling prey to gypsy tricks or refugee desperation. They follow ever-moving crowds of tourists through the ancient streets of several medieval cities, through palaces, castles, churches, and cathedrals where they are not surprised to be charged ticket fees to enter.

In the inner gardens of the Royal Alcázar in Seville they deliberate over taking the time and energy to walk into the labyrinth of cypress hedge some sultan seven hundred years ago ordered built for meditation for the mind and exercise for the body. It remains intact, maintained, trimmed and pruned all these years even as the rulers and religions change. They waiver indecisive for long moments over whether to enter the labyrinth or not.

From outside the paths between the tall cypress hedge, the intricate course of walkways can’t be seen. They see curious expressions on the faces of tourists coming out of the labyrinth and don’t know how long they might have wandered or lingered inside. There is laughter from children chasing and hiding from each other inside, but the laughter eventually stops.

The man from Nebraska is already tired from the hour they stood in line before buying tickets to enter Seville’s spectacular cathedral where they roamed for two hours following audio explanations through headphones. There had been another line for an hour outside the Alcázar so the husband is weary of going inside the labyrinth, this maze whose meaning and purpose he neither cares to enter nor understands.

The wife, however, insists, and pushes her husband, like she so often does, to do things he is reluctant to do and go places he is reluctant to go. This causes a begrudging silence between them as the wife takes her husband’s hand and leads him into the Sultan’s garden labyrinth; and the husband, once inside, releases his wife’s hand and all the accumulated dread and fear unfold.

James Miller Robinson is from from Huntsville, Alabama