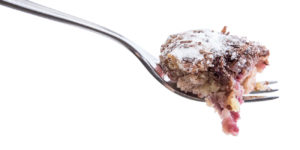 I’m loving the idea of going through old cookbooks and magazines and somehow reinventing recipes to share.

I started with an old Gourmet magazine, November 1990, and I was blown away by the complexity of the recipes and obscure ingredients. We make a few complicated dishes, but we’ve simplified our cooking and eating over the years. Back in the day, Dale and I used to joke about recipes that started with, “Have your fishmonger …”

The guy at Safeway is as close to a fishmonger as we ever got.

There’s a section of the magazine called, “You Asked for It.” People write in about some specific thing they ate in their travels, and could Gourmet possibly get the recipe? I read this one out loud to Dale:

At the wonderful Hotel Romazzino on Sardinia’s shimmering Costa Smeralda, we had a dish of baked noodles and lobster, covered with pastry, that was almost too good to believe. Was it a dream, Gourmet, or can the recipe be obtained?

We had a good laugh over that one.

Still, the same magazine features Pumpkin Cheesecake with Bourbon Sour Cream Topping, and I have actually made that. Twice! Thinking about making it this year for Thanksgiving.

I’m not dissing the magazine. It gave us many years of pleasure, and I’m still excited to dig in and rediscover nuggets from the past. It’s a good retirement hobby for me, but I doubt I’ll make enough changes to call them my own. I will be lucky to call them edible.

Have no fear. I’ll continue to write about food in some form or fashion because it’s practically all I think about, and it’s important to enjoying life, especially in retirement. But even if a fellow retiree is inclined to cook fancy food, I hardly think they will be stopping by to get tips from me. There are too many great resources already out there.

My progress on getting over the need to accomplish something was also a wee bit overstated. I mean, it has been less than two weeks since I decided to focus on the little things that make me happy. Although cooking makes me happy, in hindsight, reinventing 40 years of recipes sounds a wee bit driven to me.

As for retirement pursuits, it’s kind of like being a kid trying all the sports until you find one you actually like and are good at. Sometimes you have to take big bites. Go ahead, do it!