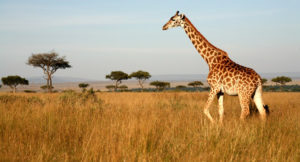 I had two big reservations about our Kenya Safari.

Our itinerary from our home in southwest Florida was: Tampa, Philadelphia, London, Nairobi.  Two hours to the Tampa airport from our house, 24 hours on various airplanes and layovers in airports. A total of thirty hours of travel!

Nancy has no trouble sleeping on planes. She is often dozing before the plane leaves the gate.  I’m not so lucky. I’m 6′ 5″ and 250 lbs.  I just can’t get comfortable sitting in an “economy” seat.

I loaded up my phone with podcasts, bought an Amazon Fire tablet with audiobooks and games that didn’t require WiFi. I had battery backups to last 24 hours.

The plane from Tampa to Philadelphia was an Airbus 320. The seats were OK. I jinxed us by commenting: “If I have this much room all the way, I think I can make it.”  I had about three inches between my knees and the seat in front of me. Doable. Even if the seat was reclined.

The British Airways segments were all Boeing 474’s. “Jumbo Jets” they used to be called. A plane that has been in the air 50 years. I suspect the planes we were on were among the first to fly. Now they are “Cattle Cars” for economy class passengers.

I wear hearing aids. I knew that putting earbuds in with aids probably wouldn’t work, so I packed some old headphones that lay on top of the ear. Not the fancy new over the ear headphones that everyone else had… so they didn’t block out the engine noise. Closed captioning was an option for the first run movies, but it was so small – I couldn’t read it!  ARGH.  The hearing problem kiboshed my audiobook and podcast options. With the volume set as high possible, I just couldn’t understand.

My entertainment for 30 hours +/- of flying consisted of — staring at things. Nancy dozing, the people around me dozing or watching movies/television programs, the back of the seat, the flight attendants.

We toyed with the idea of spending a day in London to break up the trip. We did – and it was excellent advice. I may not have made it from London to Nairobi otherwise.

After the thirty minutes into our first game drive on the third day in Kenya we looked at each other and said “It was worth it.”