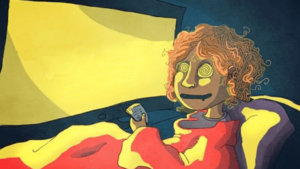 I’ve decided to try a new feature. I say try, because I know myself all too well. As a Libra I tend to go with my own flow so setting any new discipline for myself usually falls by the wayside. In my advancing decrepitude I’m learning to cut myself some slack, though. I spent too many years in the corporate workforce to allow my retirement to follow those old rules and regs concerning being a winner. I won already, ok? I made it through commuting, single parenting and climbing the ladder to come out relatively sane. All this is to say I may or may not continue this as a weekly feature. It depends on my mood, energy, and motivation. Here goes.

We’ll see if I continue this silliness.

SK Waller is an author and composer. Books One and Two (With A Dream and With A Bullet) of her rock and roll series, Beyond The Bridge, takes places in late 70s London. Read more at SK Waller SKWaller.com.