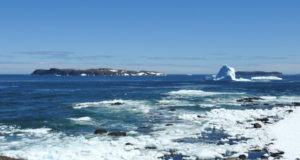 T R A V E L  In eastern Canada, southwest winds coming up the Gulf of St. Lawrence are funneled into the Strait of Belle Isle by the terrain of Labrador and Newfoundland. There they meet the Arctic-spawned winds riding south on the back of the Labrador Current, the engine that freezes the strait each winter. Strong tidal currents, gale-force winds, fog, and seabed-scouring icebergs in varying seasonal combinations produce constant hazardous conditions in the strait. Even on the most beautiful summer day a storm can howl up in minutes.

One drizzly afternoon at the little harbor of Pigeon Cove on the Newfoundland side of the strait, I stopped to talk with a man who was walking the shore. He told me he was a deep sea diver who lived near St. John’s, and was laying cable across the strait to southern Labrador. Choppy seas had given him the day off, though he was wetter now than in his undersea work. He said it was a great day for spotting birds, and pointed out several species – all that could be seen – by name. He was also interested in the shore itself, and knew the rocks were limestone with unusual plants. He was going to walk as much of the shore’s ledges and gravels as the rainy day allowed.

As we talked, it occurred to me that he must have had one of the most dangerous jobs in the world, his current workplace the cold and turbulent waters of the strait. But he said he loved his work. Obviously having a great interest in the planet, he seemed to be living in, or off of, the interplay of enthusiasm and risk. He was more observant than most of us, with heightened awareness a normal state of mind, and a necessity for his occupation. He might have been an explorer of frontiers in an earlier century.

Were I a young man, I might have been intimidated by his extraordinary yet casual competence. But now I am old enough, and content enough, to admire his larger life. I share his enthusiasm, even a bit of the risk, but not at that depth.