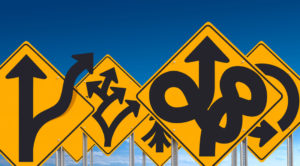 Maybe it’s a function of feeling like you’ve reached the three quarter mark, the back nine, the fall season, mid-life plus, whatever….but have you found yourself second guessing some of the turns you made at critical junctures in your life?

It might be just a few “what-ifs” or an entire catalog of them, but I sense that many baby boomers could be wondering how their lives might have turned out had they taken a different path. How would life be different if you majored in accounting instead of physical education? Where would you be now if you married Alice instead of Denise? Clown school may have been the worst idea you ever came up with. Sorry that you only had one child or sorry you had any children at all. Was the third marriage your biggest mistake?

Most of us can identify some crossroad where a choice was made that changed the course of our lives forever. Choice of a mate would certainly top the list but a first job or career choice would be right up there in the critical crossroad category. So let’s say you didn’t marry Alice and instead followed Denise to Oregon to join that commune. That would most likely mean you never went to medical school but instead ended up selling farm equipment in Iowa.

The geography choices alone can be critical determinants in the turns your life takes. Settling in the Pine Barrens of New Jersey seemed like a good idea in the halcyon days of 1970…not so much now. Las Vegas turned out to be a bad locale for someone who realized he was a compulsive gambler.

At some point we just have to come to terms with the choices we’ve made and by that I don’t mean we settle. Life turned out the way life turned out and while it may be interesting to ruminate about how it could have been different, you’re better off just marveling that you made it to this point at all.

Besides, you still have crossroads and choices ahead and if you don’t pay attention you could miss your turn all together.