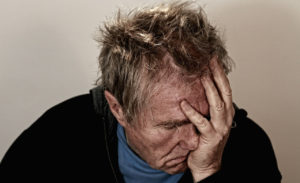 On Monday I made my best effort at pretending to be done with this current version of a cold or flu or whatever it is that for the last week has made me feel like throwing in the towel. “I am better,” I kept telling myself, certainly well enough to shower and dress and sit bravely at the kitchen counter while Eloise made dinner.

There I sit, making believe I’m over it, talking about the weather and whether or not I need to cancel some appointments. “Oh, I’m fine now,” was my position. Then in an instant there came a series of realizations that no, maybe things really aren’t exactly right in my world. It’s as though a piercing bright light comes on, then switches off, then flashes to signal an emergency state as I comprehended in rapid succession that I feel a little woozy and am having a struggle to hold up my head, then wait a minute here, I’m keeling over, and oopsies, dark fear, now it’s clear that I have lost control of the situation, yep, sure enough, here I go, I’m on my way down to the floor.

I remember making an attempt to tuck and roll the way they explained in the AARP Magazine, but by now the room was bucking and spinning in such a way that it was all I could do to lie there spread-eagled and hang on to the tiles.

The last time this happened to me was in Amsterdam where jet lag and too much of too many good things brought me to my knees. I knew I was finished, unable to communicate except to mumble about calling an ambulance. On that occasion all I needed was a sugar cube and a big glass of Coca-Cola to correct the blood sugar levels and revive me.

What was happening on Monday was no doubt the same thing all the other flu cases are reporting this season. Sweat kept coming and then chills and the certain knowledge that I was going to need to crawl to get to the bathroom. Standing was out of the question. If there is an happy ending, it would be that I made it to the toilet without incident. I didn’t sleep much and the next day there was a dull ache all over that now and then focused on a specific body part. Pain in the ass is not just a figure of speech.