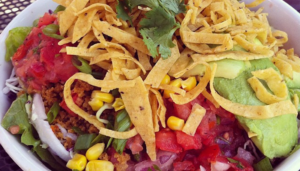 My mother was an imaginative cook. At least that’s how we framed it in her eulogy.

The thing is, though, she was not a very good cook. Invariably she would not have all the ingredients required for whatever she was attempting to prepare. Since she didn’t drive she could not run out to the store at a moment’s notice to get what she needed. A neighbor might have had what she wanted, but I don’t remember her ever borrowing from a neighbor.

“I didn’t have lemons,” she would say as she set some dish down on the table, “so I used vanilla. I think it will be okay.”

We could never understand her method for choosing the substitute ingredients. Similarity of taste seemed to have nothing to do with it. I had a theory that it was bulk. Whatever would fill up the space in the same way as the missing ingredient was what she used. Or it may have been more random – whatever she laid her eyes on first. She did always replace solids with solids and liquids with liquids, so there was that.

And, no, it was never okay. It was weird. You can’t use vanilla instead of lemon in a sauce for chicken. Or peanut butter where cream cheese is called for. Or sprinkle raisins on green beans because you don’t have slivered almonds.

I wish I could say some of it tasted good. But it rarely did, and on occasion we would all come down with queasy stomachs. Or worse.

When she died, my brothers and sister and I tried to put together an appropriate and loving eulogy to present at the memorial service. Everyone who knew her was aware that she was a little scattered in her housekeeping efforts so we felt we had to address it in some way. We thought the food stories would be fun, but we didn’t want to sound negative. Hence the endearing title of imaginative cook. There were a few snickers from close relatives in the know, but for the most part people just nodded and smiled.

I did learn from her. By the time I had to put on an apron and headed for the kitchen I had learned something important. Something that has served me well for the rest of my life. And this is what I learned: Try to plan ahead a little.