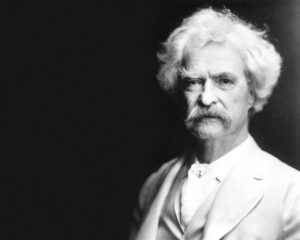 F I C T I O N  I bumped into Mark Twain the other day as he was coming out of Brooks Brothers. The white suit was so bright that I was temporarily blinded.

The reports of my death have been greatly exaggerated.

“It’s funny that you say that because some people just keep harping on this whole fake news thing.”

Get your facts first, then you can distort them as you please.

“Exactly, and there’s a whole lot of distortion going on these days. What some would call outright lies.”

The most outrageous lies that can be invented will find believers if a man only tells them with all his might.

“Well there’s a lot of that going around these days, especially among people elected to hold high office.”

Patriotism is supporting your country all the time, and your government when it deserves it.

“Amen to that. Are you working on any new books? You still have a lot of fans/”

My books are like water; those of the great geniuses are wine. Fortunately everybody drinks water.

“And everybody likes a good Mark Twain yarn.”

I have been complimented many times and they always embarrass me; I always feel that they have not said enough.

“That’s witty. I wish I thought of that one.”

Repartee is something we think of twenty-four hours too late.

“True, but you seem to have a knack for the bon mots. How do you remember them?”

When I was younger I could remember anything, whether it happened or not.

“That’s one of the drawbacks of getting older I guess.”

Age is an issue of mind over matter. If you don’t mind, it doesn’t matter.

The more you explain it, the more I don’t understand it.

It is better to keep your mouth closed and let people think you are a fool than to open it and remove all doubt.

“This may be a foolish question then, but do you believe in the afterlife?”

Go to Heaven for the climate, Hell for the company.