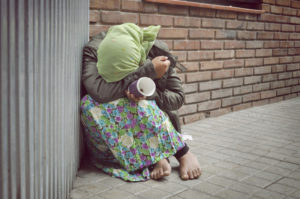 E S S A Y  What did I expect, taking the Ferry from Sausalito on Halloween? Hell, I was raised in San Francisco and have watched the City by the Bay bloat into a mecca for startups in a modern day version of the 1848 Gold Rush

Still, I couldn’t help being surprised by tumescent penises and leather-clad slaves in chains being goaded down Market Street by whip-wielding masters — much to the amusement of scores of young entrepreneurs snapping pictures with their cellphones.

Reaching First Street, I started to veer around a clutch of pedestrians, several of whom had stopped to take selfies, while other pedestrians gawked and laughed at someone moving down the crowded sidewalk toward us.

Then I saw her and knew immediately it was no Halloween costume the woman was wearing. Her blouse was torn, her skirt dirty, and her shoes scuffed and muddy. The middle-aged woman wasn’t mocking the homeless. She was one.

As she passed, I saw what she couldn’t, and what had drawn everyone’s attention and derision —- a strip of toilet paper at least twenty feet long was being trailed behind her.

She seemed unaware of the attention she was drawing, for she walked straight ahead, neither looking left or right, but continuing down the crowded sidewalk, with the spool of toilet paper following.

Not one person stepped forward to tell her. Everyone merely continued watching as she meandered through the lunchtime crowd.

“What happened to dignity?” I wanted to shout. Instead, I followed the woman toward the corner, and when she stopped for the traffic light at New Montgomery, I walked quietly up behind her so as not to frighten her and stepped on the square of toilet paper dangling from the bottom of her dress.

The light changed and she started across the street, with my shoe breaking the white trail of toilet paper no one wished to bring to her attention. At least she was no longer a spectacle; I thought, then turned back to the crowd and was unable to find a pair of eyes to meet my own. Everyone had gone back inside today’s version of the ostrich with its head in the sand: the ubiquitous handheld screen.

Call me a dinosaur, but at least I lived my life on the earth and not inside a simulacrum of it. I retained a few essential things from the mist of the past: there is no app for empathy; and dignity is a given for anytime two people appear to reach other. Or at least used to be.

Besides, all of us are trailing something, aren’t we?

Stewart Lindh is from Sausalito, California