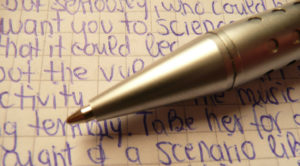 F I C T I O N   Thursday 3:41 PM- This hasn’t been a great day for me as a writer. Nothing I’ve tried to say to myself or anybody who’ll listen makes any sense. It’s almost cocktail time, and I feel like the proverbial drinker with the writing problem.

I was almost at the point of giving up on the project when it dawned on me that maybe the perfect topic for this assignment could be a flagrant outpouring of just how much I don’t appreciate the opportunity. To satisfy my goal of 400 words will require a half hour in the notebook, then another half hour creating a transcription to the word processor, plus a half hour to check spelling and punctuation. Then I’ll probably put it away for a few hours and maybe come back for another look tomorrow. Do the math; writing doesn’t appear without time and effort.

I ask myself: what do I hope to get in return? There really aren’t any guarantees. Is it because I enjoy suffering the self-mutilation? Do I really think that a normal person would read this pathetic lament and care in the least about my self-inflicted misery? Come on now, if you’re having zero fun as you claim, and there is nobody but yourself holding a gun to your head demanding pages, help me out here, there must be something in it for you? Do you love the worthless feeling of not knowing what you want to say or how to say it? Is this a play for some kind of prize depicting un-enlightenment?

Before you attempt to weasel out of telling the truth using that “I don’t know” scam, try completing the following sentence: “I don’t know, but if I did know . . .” I’d say that it’s probably about wanting some kind of recognition for the effort I make and it appears that I’m not getting that satisfaction from the writing process itself.

I could conclude this rant the way I usually do by giving myself a pat on the back for not being tossed away, and then take my own advice to remember that it’s only fiction, it’s my chance to tell lies like a politician or a novelist. Some people might envy me the option to say whatever I want, remind me to be grateful that for now I am my own harshest critic, and that tomorrow is indeed another day.