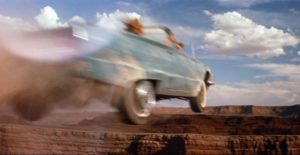 T R A V E L  We’d taken a couple trips back in the day, when we were students. And we traveled together a few years ago when both our husbands were gone. This time we planned eleven days on the road: every important stop in New Mexico and Arizona from Carlsbad Caverns to the Grand Canyon and points in between.

She lives in the Midwest and I’m in the Southwest. We put the trip together over the course of a year, conferring by email and on the phone. We both noticed an interesting phenomenon: almost any time we mentioned the trip to someone they came back with “Oh, Thelma and Louise.” And then when I returned, friends urged me to write about my Thelma and Louise “experience.” I wasn’t sure I’d had a Thelma and Louise experience and it had been at least 25 years since I’d seen the movie. Truth be told I didn’t even remember which one was which anymore.

Undaunted by my hesitation, a few friends secured a copy of the movie and we made a festive evening of it. Snacks, pizza, margaritas. And the movie was good. Thelma and Louise are quite clearly delineated and now I know the difference again. So how did our trip stack up against theirs?

Well, let’s see. First there are the cars. They drove a 66 Thunderbird. Pretty cool. We ventured out in my 2009 Subaru Forester, newly overhauled by professionals to insure its safety on the road. They drove off the road a number of times while being chased by police. We never did. Our only encounter with the law was at a border patrol stop in southern Arizona. There was a short line and we spent the time rifling around in the car for our purses so we could produce our drivers licenses when asked. Our turn came, an agent stuck his head in the car, looked at the two of us, and said, “Both American?” We nodded and he waved us on. Thelma and Louise should have been so lucky.

Then there was the rowdy bar. Nope. The assault in the parking lot. Thankfully, no. Stolen money? No way, we used credit cards. And at the Grand Canyon, the highlight for sure, we did not drive off into the abyss. I’m not expecting that anybody will want to make a movie of the Susie and Norma trip any time soon. After all, no sex, no death, but I swear, it really was fun.