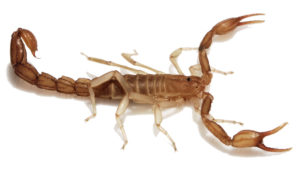 E  S  S  A  Y   I killed a scorpion in the bathroom today. How many people you know can say that? And don’t give me that “living thing” rebuke. Did you want me to put this stone cold killer in the scorpion relocation program?

Okay, they don’t often kill you. I’m exaggerating as usual. But within a few hours of being stung by a scorpion you can experience pain and swelling, difficulty swallowing, drooling, muscle twitching, respiratory problems and sometimes death. Does that sound like fun?

This was an Arizona bark scorpion and they, like most scorpions, prefer to hang out in dark and damp places. Hence, it’s no surprise I found one in the bathroom. People here advise one to shake out their shoes and damp towels before using. One advisory notes that scorpions can climb any surface except glass and plastic, which comes as little comfort since houses are made mostly of wood, plaster and tile. They have some impressive survival skills due to their ability to slow their metabolism. It allows them to use little oxygen and live off as little as a single insect per year. You can freeze them overnight and put them out in the sun the next day only to watch them thaw out and walk away. We’re talking hardy.

The stinger is in the tail but I didn’t feel the need to get up close and personal with this cousin of the spider family. Experts suggest you hunt for them at night when they are most active. Dig out your old black light if you have one because they glow in the dark. A flashlight with a black light bulb will work just fine. They also suggest you have a long-handled tweezers or a knife and boots. They don’t say it but I think the implication is that if you don’t want to tweeze them you could alternatively give them the boot. You can also use Raid ant and cockroach spray which has the fastest activation. It’s a good idea to check the perimeter of the house at night with black light in hand to see if you can find them before they get inside.

Cats and chickens enjoy hunting scorpions so if they are persistent, it may be time to get a cat or keep chickens in the yard. Ground cinnamon is a natural scorpion repellent but it can get pricey sprinkling that spice all around the baseboards.

My defense plan? I’ve only seen 2 scorpions in the house in 8 years so I’m going to do nothing unless a third one shows up.

However, I will shake out my shoes more often.