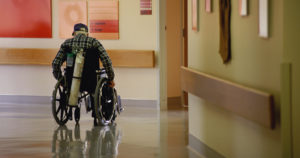 Billy Donahue was a Florida native, five-foot-two, 130-pound former jockey. Billy had traveled all over the U.S. on the horse racing circuit. His only family was a brother from out of state, who wrote often and sent him spending money. Billy mostly stayed in his room watching TV, but he enjoyed talking to me about his career as a jockey and was particularly pleased to learn that I used to visit the Ak-Sar-Ben track in Omaha .

He was a low-talker , real quiet, and so I would always have to lean in close to hear what he was saying . The closer I leaned in to hear him, the farther back he would lean until he started to fall, and I would have to rush around behind him to make sure he didn’t fall to the ground .

I remember Petersen as loud, grumpy, in his late 70’s, still proudly wearing a chip of the financial industry on his slumping shoulders . He would park his wheelchair at the entrance to the dining hall where ladies became victims to shouts of “BITCH” as they neared the door. Petersen was served in his room whenever a prospective resident or family member came on a tour at meal time.

Mr. Smiley we called “Sarge.” He served with the U.S. Army in Korea right out of high school and again in Vietnam . My military experience created some common ground for the two of us. He was very personable ; always smiling; in good physical shape.

One afternoon we heard a pounding on the office door and a voice shouting, “Man down. Man down. Ass in a bucket.” I opened the door to find a very excited Mr. Smiley repeating his man-down refrain several times and gesturing for me to follow him. We hurried through the courtyard and along one of the residence hallways where I discovered Petersen , our resident “curser,” with his butt wedged into a large mop bucket.

A staff member driving home after work noticed Mr. Smiley walking beside the road some distance away from our assistant living facility . Like all of our residents, he was restricted to our property . Smiley was AWOL , heading to the separate facility where his wife resided. They had been married fifty-five years, and he missed her, even though , according to his daughter, they could not get along well enough to share the same space for an extended period of time.

Jack Ferrell is a retired farmhand, janitor, factory worker, intelligence officer, college professor, corporate officer and innkeeper, who has witnessed more events and heard more stories than he can begin to recall.