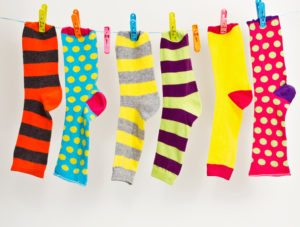 I lost a sock. It was one of my favorites and I did the usual search in and around the dryer with no success. I saved the mate because I loved this pair so much and I felt confident that it would turn up, as lost socks usually do, stuck to a towel or a pair of underpants or some such item.

This happened about eight years ago. Until yesterday the missing sock had never surfaced. I’d kept its mate all this time, stuffed into a corner of my sock drawer. I’d look at it every once in a while and wonder what its more adventurous partner was up to. I’d touch it sometimes and remember how cozy the two of them felt on my feet. But I was resigned to never seeing them together again, unless maybe when I moved and all the furniture left the house. Or if I bought a new washer and dryer and found the sock under the old machines as they were carried out of the house to make room for new ones.

And then yesterday morning I walked into my kitchen and there was the sock, right in the middle of the floor, looking exactly as it did the day it went missing. Okay, so had I been stepping over this sock for eight years and not noticing it? No way. I would stake my life I hadn’t even stepped over it the night before. I should point out that I live alone in my home. No other humans, no pets. My first thought was that there must be an animal in the house. Probably a mouse. It found the sock and was moving it to a convenient place to tear it apart and use the strands to feather its nest. Something made it drop the sock and run, maybe my approaching footsteps.

Did I say that was my first thought? Actually, it was my only thought. What else could it be? So I reintroduced the sock to it’s long estranged partner and dropped them both in the laundry so they could be washed together and continue to look alike. I set a trap for the mouse. Next morning: no mouse in the trap, an outcome met with relief and dismay. Still, I tried again the next night, with even more food in the trap. Nothing. So do I have a roommate I haven’t vetted? And here’s another thought – what if I do the laundry with the newly reunited pair in it, and only one of the socks appears in the basket after I empty the dryer?