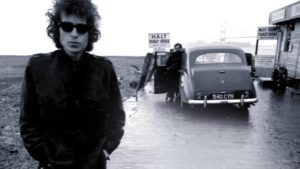 A R T S   I first encountered Bob Dylan in 1964 when I was asked to perform Blowin’ In The Wind at an Elks dinner in Ballard, California. I was a tender 12 at the time and I’d actually been asked to perform two songs that night. The other was If I Had A Hammer. I’d heard that song the year before on the popular TV show, Hootenanny! but I’d never heard Blowin’. I loved that show. I’d watched Sing Along With Mitch and played albums by Joe and Eddie, the Kingston Trio, Odetta and many others since I was a kid so when Hootenanny! aired, I was hooked. It was in fact the popular single, Walk Right In by the Rooftop Singers that fired my obsession with the 12-string guitar so I guess you can say I’m a folkie from way back.

Someone pointed me to Bob Dylan so that I could learn Blowin’ In The Wind for that gig, but I think I learned it from the cover by Peter, Paul & Mary. I liked the song. I thought it was pretty, but it was the lyrics that grabbed me. It sounded like an anthem. It was saying something important, a message I’d heard many times before, but this time it was delivered in a way that was like a bullet in the brain. I had to find the original recording.

When I brought home The Freewheelin’ Bob Dylan and tore off the cellophane wrapping, I had no idea my life was about to change and that it would continue to change and evolve for the entire time I’d walk this planet. I think I’d been prepared, though. I think all of those folksingers before had been leading me up that path, some gently—the Kingston Trio, for instance—and some not so gently, like Odetta. On that afternoon Dylan became a lifelong mentor. Oh, he doesn’t know that. He doesn’t even know I exist, but his work affected me like it has affected so many other songwriters. It’s safe to say I don’t where the hell I’d be musically if he hadn’t happened. I don’t know where music would be.