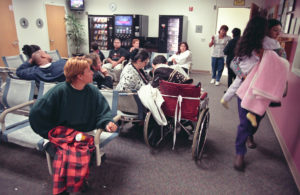 You can wait in the emergency room for a long time. There will be lots of other people waiting for a doctor. I didn’t think I needed to be there, despite days of serious abdominal pain. This is called denial: I don’t get sick.

I went reluctantly and spent nine hours there, time I shared with all manner of wretched people waiting their turn for a bed and a little privacy. The tragedies unfolding included – but were not limited to – two women enduring miscarriages, one teenage boy writhing on the floor suffering a drug overdose, and one little girl of about four or five, sporting a huge mop of curly black hair, who had fallen on that adorable head and was clearly in serious trouble. She remained almost comatose for the several hours that I observed her. All the while I watched these folks, not the least bit concerned about myself, not guessing that I was possibly closer to death than any of them.

The staff of the emergency room are worth a mention. I am not speaking here about the doctors. You do not see a doctor until a bed becomes available. I’m talking about the various receptionists, nurses, and technicians who tend to you while you wait. They are calm. So calm, in fact, so deliberate and slow-moving, that at no time do you get the sense that they feel anything of an emergency nature is taking place in their sphere of influence. I’m not sure how they face so many distressed people knowing all they can do is provide them with forms to fill out.

So I waited. And watched. Both ailing women were comforted by their husbands and mothers while they suffered pain and mourned the imminent loss of a child. The teenage boy was accompanied by his mother, who mainly sat there and watched him. She was so cool about the whole thing, reading a magazine, that I suspected she’d been through this ordeal before. The little girl was passed back and forth from mother to father and opened her eyes occasionally when she was being moved and then closed them again.

I’d like to be able to end this little diatribe by telling you what happened to everybody, but of course I don’t know. One by one they all disappeared through the door that led to the much coveted beds. Although I walked around that area several times while I was waiting for my own diagnosis, I never saw any of them. No doubt the women were fine eventually. And the drug overdose boy was already sufficiently awake to walk with help by the time his bed became available. It’s only the little girl I worry about. I hope she is alert and playing with her friends again. And me? Ruptured appendix. Oops! I guess I do get sick.