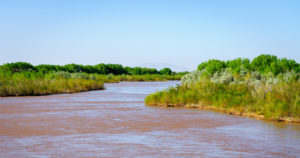 Many great literary works make some reference to water. Rivers run through stories and generally represent the movement of life. The constant movement. Change.

After crossing the Rio Grande hundreds of times in my car, over the bridge, I was shocked to go down the banks one day and see how rapidly it is actually moving. From even a short distance above, it appears to be totally stagnant. It is anything but. It is, like all rivers, charging hastily forward, downward, to its home in the ocean.

Greek philosopher, Heraclitus, said “No man steps in the same river twice.” (I would say “person” of course.) And it’s true. But what does it really mean?  That the river is always moving? That life goes on? That you don’t get a second chance to correct a mistake? Or to relive a happy time? If you try, it won’t be the same. Something will be different. Everything will be different. Try it more times – different again. Different every time. Read a book again. See a movie a second time. It’s no use; you can’t recapture what you had before.

You can’t go home again. Thomas Wolfe said that and used those words as the title of a novel. I would say it means the same thing. Home, whatever that is, is gone, when you leave it, except in your memory. Return to your old elementary school. You will be shocked at how it seems to have shrunk in size. The river just keeps on flowing and we flow with it. Or fight it if we’re fool enough to try.

Also attributed to Heraclitus: the only constant in life is change. (He clearly gave this subject a lot of thought.) A silly joke; a play on words? Hardly. No, it’s the truth. I know some people who cannot, will not, change. They wear their hair and their makeup the same way they did 40 years ago. They think they look the same. But they don’t. The hair might look the same, but the face under it, like Dorian Gray’s picture in the attic, is changing. Best to change with it. Accept this as a fact of life.

Or fight it if you’re fool enough to try. But heaven help you.

Norma Libman is a journalist and lecturer who has been collecting women’s stories for more than twenty years. You can read the first chapter of her award-winning book, Lonely River Village, and an excerpt from her new memoir, The Story of the Story, at NormaLibman.com