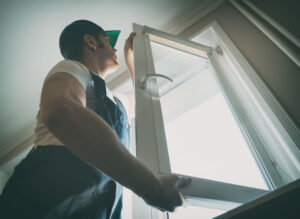 We were having a window replaced on a second story room. When the installer arrived, I showed him three different routes through the house to get to the room and the porch beyond. To my surprise, twenty minutes later I could hear sawing and banging but hadn’t seen the guy coming through our home. Curious, I looked outside to find that he had raised a ladder to the roof of the garage and was climbing up and over, and over and down with new parts and old. Wondering if he was worried about dirtying our carpet, I sat on the impulse to ask. After all, you don’t want to interrupt a craftsman in the middle of his task. He might do himself a harm.

But his roundabout way of approaching the task reminded me of an adult-ed class in small engine repair I had taken at the local high school. I had earned a B for my tune-up of a lawn mower engine and was feeling pretty satisfied with my efforts until I learned a classmate had earned an A+. I complained to the instructor. “Oh, that guy, he got extra credit for degree of difficulty. He’s a doctor, you see, an OB-GYN. And he did the whole procedure through the exhaust pipe.”

No wonder I resented the physician, given my fondness for efficient procedures and people who believe quicker is better. I tend to scorn anyone who takes longer than necessary or makes a job more elaborate and convoluted than required. However, as I have aged, I’ve come to realize that not everyone thinks saving time or energy is a great value in life. Maybe ‘thorough and slow’ is the ideal for them. Like the time, invited for dinner at a friend’s house, I could hardly stand it while we shared a glass of wine and watched our hostess slowly and deliberately peel each of two dozen shrimp for our taco dinner and then delicately de-vein them like a neurosurgeon tickling around the lobes of the brain. I had to resist saying, “Here, let me do that. I’ll finish in three minutes.”

I guess that’s why some people make good supervisors, and production-line foremen and jet fighter pilots while others would rather paint landscapes or rent row boats. You might be able to guess what side I favor.