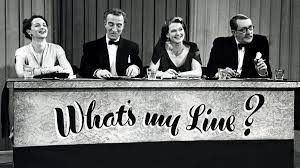 You can’t work at a profession all your life and not carry over some telling behavioral traits into retirement. I like to observe elder folk, like me, and try to guess their earlier career — a version of the old TV show: ‘What’s my line?’ but instead ‘What was my line?’

For example: I was in a writing group that included two retired grade schoolteachers. We were in the middle of our bi-weekly read-throughs in a library meeting room when two eight-year-old boys stuck their heads in the door. There was a pause on all sides while we stared at each other.

A kind of stand-off at the OK Corral. One of the boys drew first.

They both took a step into the room. As if on a silent count of, one, two, both teachers fired back, “You’ve had your peek. Now leave.” A remnant from years in the classroom?

A retired sheriff was recounting a campus ruckus he had helped calm down. Talking in a normal voice, he told of the crowd getting more and more rowdy even in the face of his auxiliary mounted posse. To demonstrate his commanding presence under stress, he then raised his chin, took a deep breath, filling his diaphragm like a national anthem singer, looked over our heads and blew us all back a step or two with his stentorian, “Stand down. Disperse. Now.” Crowd control 101 learned at the academy.

Or my mother who was describing her recipe for spaghetti and meatball sauce to a friend. Hers was not a written recipe, composed in precise measured words of ½ teaspoons and ¼ cups. No. She described with gestures: hands and fingers. A pinch of this. A shake of oregano. Lightly rolling and browning meatballs illustrated like a conductor coaxing a soft interlude in a stormy symphony. Ingredients were only part of the process.

Or my friend, sitting at our snack bar chatting. He idly reached for the silverware caddy and without thinking about it began to sort them by spoons and forks and butter knives. I was tempted to tell him to leave them in my original jumbled mess—I mean who cares—until I remembered that he was an auditor and spent his work-life sorting.

Sometimes you don’t have to ask a person what they ‘used to do.’ You can just watch.