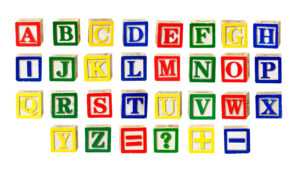 Welts, lumps and discolorations mysteriously appear on my body lately, and I don’t remember how they got there. For example, putting on my sock, the other day, I noticed a bruise on my shin. My daughter, Mia, helped me pinpoint its origin. Seems her toddler, Zo (aka Lorenzo), had just come out with a four-letter word. It was a good thing we were on the phone because I beamed from ear to ear, thinking one four letter word out of his first five was a good start for the kid.

Then, Mia lit me up. “I left him with you for two hours while I went grocery shopping yesterday and he starts using an…inappropriate word.” I asked her to tell me the word. “I can’t. He’s sitting right here, all ears…” she said. So, she spelled it. I wanted to respond that it wasn’t that bad. It wasn’t even a four-letter word…well, depending on how you spelled it.

As she continued to flay me with her sharp tongue, I found myself getting just a little defensive. “So, I’m the problem. And how did you deduce that, my dear Watson?”

“Huh!” she barked. “We never use that kind of language around junior. And besides, with Covid lockdown and all, he hasn’t been out of the house before or since you babysat him.”

After a short pause to gather my dignity, I replied, “I don’t recall using that word in his presence. But, you never know. Might’ve happened.”

Child psychologist that she became (on our nickel) my daughter allowed that children at her son’s developmental stage pounce on words heard in a forceful outburst of strong emotions. “Were you mad at something or hurt yourself while he was with you?”

I had to think for a moment. “Ah! Yes,” I finally recalled, rubbing my leg, “I did bang my shin on the coffee table when he was here. And yes, thanks for asking…I’m fine now.”

After she hung up, I pondered my increasingly frequent forgetfulness. The softness around the edges of my days. What happened to that pre-school receptivity to all things new; to the vivid awareness of any excitement in the air. I gotta spend more time around that kid. Go, Zo!