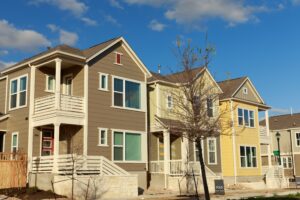 Sooo…boomers once again have a target on their backs, and this time it’s about housing. Or the lack thereof. The housing supply in the U.S. is now at record-low inventory. We’re short by almost 4 million homes to meet the demand. Boomers make up 28 per cent of the adult population but they own 44 per cent of the real estate.

Tack on the fact that boomers are not selling their homes as they age, and the problem gets worse. Boomers are staying put because they want to age in their homes, not in assisted or nursing homes. They like where they live and being close to friends, grocery stores, etc. And, even more importantly, they are healthy enough to stay put and not require aging-friendly housing.

So, the shortage is our fault. Oops.

Wait a minute. Some experts say don’t blame boomers, just build more housing. Problem with that idea is that current zoning makes it difficult to build anything but single-family homes. Most communities, urban and suburban, would rather have single-family owners. That rules out duplexes, condos, and tiny houses.

What the hell is wrong with a duplex? That’s what a lot of people would like to know. A duplex obviously doubles the number of families that can live in one dwelling. That should be a no brainer in many communities. Also, I get why you don’t want a tiny home next door, but in many urban areas land could be set aside for a cluster of tiny homes and there is an enthusiastic audience for that type of efficient housing.

Many communities are just now realizing they must modify their zoning to meet the demand and allow their community to grow with diversified types of housing. You have to hope that baby boomers won’t stand in the way of the trend toward more tolerant zoning. Otherwise we will be catching the blame once again.