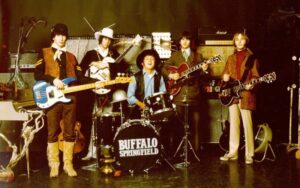 Just a few bars of Mr. Soul and I get instant flashback in the time machine to somewhere around 1967. My allegiances were split between the Motown Sound and the new music that was coming out of San Francisco. But Buffalo Springfield took everyone by surprise. They only made 3 studio albums before everyone went their separate ways…and don’t forget that Buffalo Springfield begat Crosby, Stills, Nash and Young, plus Poco, and then Loggins and Messina.

Despite the briefness of their time on the scene, they sure had a long lasting impact on musical genres. Neil Young, Stephen Stills and Richie Furay were all singers, songwriters and guitarists from the folk and country traditions, but they melded this background and their talents into a new kind of rock sound that no one had ever heard before. The Byrds, Flying Burrito Brothers, Jackson Browne and the Eagles all have acknowledged their debt to the band’s influences on their work.

Neil Young may have been the most interesting lyricist, but Stephen Stills played great guitar, and Furay had perhaps the most pleasing vocal sound. Maybe it was the timing of trying to break through at the same time the Beatles were dominating rock music, but for some reason people did not truly appreciate the Buffalo Springfield sound until the band broke up. It’s one of the few cases where a band got more airplay after their demise than in their prime. Still, they deserve the credit for practically inventing folk-rock and country-rock.

Going back to listen to some of their prime material, such as For What It’s Worth, Expecting to Fly, Bluebird and Kind Woman, you can foretell that everyone is going to go their separate ways, but it does not in any way diminish the pleasure you can get from listening to ground-breaking musicians like these.

There’s somethin’ happening here,
What it is ain’t exactly clear.
There’s a man with a gun over there,
Tellin’ me I gotta beware.
I think it’s time we stop,
Hey, what’s that sound,
Everybody look what’s going down.