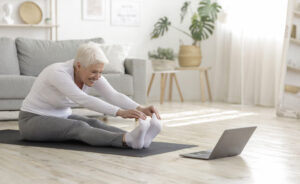 When boomers are surveyed about aging, they tend to define it in terms of 3 key markers: inability to perform certain functions like they used to; not understanding topical pop-culture references (Lil Nas X anyone? Anyone?); and last but not least, cosmetic decay (which is a not so nice reference to wrinkles, gray hair, lost hair, etc.).

Sixty per cent of those surveyed thought that having to ask someone to read the fine print was a definite sign they were getting old. Grunting while trying to get out of a seat hit a chord with 37 per cent. Twenty-four per cent thought they were old because they were not on TikTok. That last one is laughable. Knowing that TikTok exists but not wanting to waste your time on it should not qualify you as over the hill. And you can throw Facebook in that category as well.

Forty-seven per cent were uncomfortable being identified as old and offended when being called old. Many of these same people are ignoring worsening medical issues just so they won’t feel like they are old. They are hoping, no, actually convinced that the signs will disappear. Talk about De Nile!

So, you want to feel younger? Experts have some simple advice. So simple, a lot of boomers won’t bother to follow it, but here goes:

You follow these 3 tips and you can shave 10 years off your biological age according to the experts. Ten years! Such a deal! You feel better, eat better, and look better, and in return you live longer.