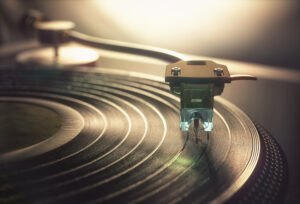 Does the list strike a chord? Pardon the pun, but if the answer is yes, you must have been a record store habitué. Maybe the record store you frequented had a booth where someone was playing records on a turntable. If you wanted to sample a track of a new album, they would go in the booth and play it for you. Now it’s easier to go to the Browse section of Apple Music in order to make music buying decisions.

The tactile sensation of flipping through the stacks of record albums is hard to duplicate on a computer, however. No one pays much attention to the art on the front of a CD jewel case – we just download and play. In the record store, you might find yourself buying an album because of the art on the front or the liner notes on the back.

Then too, there was the chance to share your discoveries with friends. Hanging at the record store was something you could do as a group. One of you was into Folk, someone else only liked Soul music, and there had to be someone who went nuts for Comedy records.

Vinyl is making a determined comeback. People are buying turntables again and music aficionados are extolling their virtues. More dynamic sound quality is a big reason and vinyl fans will swear that it’s significantly better than an MP3. Some vinyl fans just want to “own” a physical form of their favorite music and have the pleasure of inviting friends over to “really hear” the newest album of their favorite band/orchestra.

It’s one of those rare occasions when there’s an appreciation for what many considered dead and gone. Vinyl record sales actually overtook CD sales in 2020. Streaming services now dominate the music scene and are the listening option of choice for most people, but the vinyl diehards are not going away. Rock on!