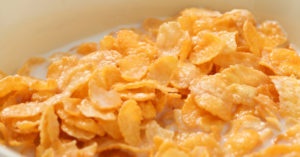 Wheaties is known as “The Breakfast of Champions.” Lucky Charms is supposedly “magically delicious.” And then there’s Trix cereal’s slogan, “Silly Rabbit. Trix are for kids.” Good thing they didn’t use the scientific name for rabbits. “Silly Oryctolagus cuniculus. Trix are for kids!”

But if John Harvey Kellogg had to choose a slogan when he invented Corn Flakes in 1894, there’s a good chance he might have chosen:

“Wanna have sex tonight?”   “No thanks. I’m having Corn Flakes.”

At the time he invented Corn Flakes, John Harvey Kellogg was an accomplished doctor, inventor, author, nutritional expert, health advocate and businessman (All good, so far.). But he also was an anti-masturbation activist.

Now you might think this is a joke. It’s not. The inventor of the world’s most famous breakfast cereal, John Harvey Kellogg, was a devout member of the Seventh Day Adventists Church and he believed that “sexual intimacy belongs only within the marital relationship.”

Kellogg’s Corn Flakes was invented to curb the passions of having sex. Even if you were alone!

So, he invented Kellogg’s Corn Flakes to curb sexual impulses and suppress the passion of that generation. John Harvey Kellogg believed sex and half-sex were unhealthy and abnormal. And he thought that meat and spicy food increased sexual desire, but that passion could be lessened by eating a tasteless food for breakfast. Wow. He could have invented Pop Tarts.

Now that you know the Shocking Truth behind Kellogg’s Corn Flakes, what are you going to have for breakfast tomorrow? Me, I’m having Komodo Dragon Chili and Five alarm-Carolina Reaper. They’re important parts of a balanced breakfast.

Jack Goldenberg is way more than a proficient copywriter. He is also the creative director at Einstein da Vinci & Goldenberg and you can get in touch with his inner adman at 10 Minutes of Brilliance.