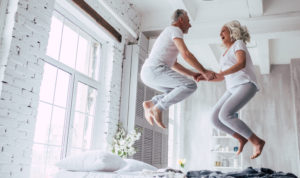 You might as well yell SEE ME! a little louder, because the fact is that the advertising world ignores us. We should be an easy bullseye for marketers but in reality, not so much. A third of the U.S. population is over 50, but when it comes to media images (talking TV and print) we only garner 15 percent according to research done by AARP. It was based on a random sample of more than 1,000 images published or posted by popular brands and organizations.

Face it. We’re caricatured in marking images as looking old and out of it and heading fast for the dustbin. Despite the fact that more than 53 million people over 50 are still working as one third of the U.S. labor force, only 13 percent of the images showed these older individuals at work. Instead, they were often shown at home or with a health care provider. Younger workers, on the other hand, were shown with their also young co-workers, and often with technology products. Only 5 percent of the images showed older workers using technology, despite the fact that 69 percent of people between 55 and 73 own a smartphone. You can bet those same people own computers and are online much of the time.

A big part of the problem is that most workers in the advertising and marketing industries are young themselves. Their natural inclination is to use images of people who look like them. Ageism is the norm in the advertising world so it’s no surprise that boomers are either invisible or shown in ways that distort who we are and the contribution we are still making to the economy. Even worse, we are often portrayed as clueless and out of touch, just foils for younger people to dismiss as “practically dead.”

The good news is that AARP did something about this trend. They teamed up with Getty Stock images to introduce a collection of 1,400 images showing older people doing what we do…running businesses, participating in sports or active pursuits and interacting with younger generations in ways that are far from insulting.

So the problem is not solved but things are looking up. Searches for “seniors” on Getty have increased 151 percent from a year ago. The most popular image now is one of women in t-shirts doing yoga. A decade ago, the best-selling photo was an older couple in sweaters on the beach.