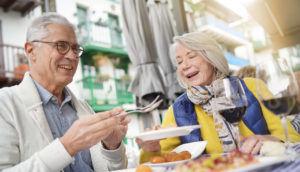 According to recent research by the National Restaurant Association, boomers are beginning to “age out” of the restaurant market.

Since when do baby boomers “age out” of things? How did that become a thing? Aging out. We’re too old to eat outside of our homes? I call bullshit on this one. Supposedly, there are fewer boomer patrons due to mobility issues, unwillingness to drive after dark and the availability of dining options within senior living communities. I will accept that these factors might limit a small percentage of the boomer population, especially if you bear in mind that the oldest boomers (born in 1947) would be 72 years of age now.

In any case, restaurant operators are setting their sights on younger patrons. So rather than staking a claim on our barrels of money, they would rather focus on younger patrons with less expendable income. They predict a slow and steady decline in boomer dollars (which apparently will parallel our own slow and steady physical decline?). So it’s all about Generation Z now. You know them. They were born after the year 2000 and cannot spell or write.

Okay fine. So while restaurants are infatuated with Gen Z, the research suggests that boomers have shifted their dining dollars to take-out and delivery. Too feeble to make the scene anymore, our dining choices will be limited to what a teenager can bring to the door.

I don’t like where this is going. Are restaurants just in the vanguard of a movement to keep boomers at home where they can receive all their goods and services when the doorbell rings?

How about we fight back against this restaurant trend by taking a bunch of Generation Z kids out to dinner a few nights a week? Everybody wins. The restaurants get our dollars, the Gen Z kids get a meal they could not afford, and they can show us how to reboot our iPhones. And don’t forget — they don’t mind driving at night!