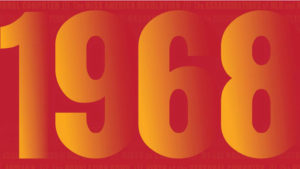 I saw a promotion recently for a Netflix documentary about Bobby Kennedy. A black screen featured the overlay of large red numerals for 1968 and it struck me that I had forgotten what a tumultuous year that was. We think we are living in crazy times now, but in 1968 many baby boomers felt a loss of innocence that probably has stuck with us to this day.

Eugene McCarthy won the New Hampshire Democratic primary in March and LBJ announced his withdrawal from the race. Everyone was shocked.

More shocking still was the assassination of Rev. Martin Luther King, Jr. in April. The riots that followed underscored the simmering resentment and frustration that African Americans felt when it came to their civil rights in a country that prided itself on believing that all men are created equal.

Just a few months later, after Bobby Kennedy had won California’s Democratic primary, he was assassinated in Los Angeles. Young baby boomers who were drawn to the charismatic politician were devastated. He represented the hope that we could be a better more compassionate nation and it felt like someone had cruelly doused the flame. His final public words have some powerful resonance still, especially at this moment in our nation’s history: “What I think is quite clear is that we can work together… And that what has been going on with the United States over the period of the last three years, the divisions, the violence, the disenchantment with our society, the divisions — whether it’s between blacks and whites, between the poor and the more affluent, or between age groups, or in the war in Vietnam — that we can work together. We are a great country, an unselfish country and a compassionate country. And I intend to make that my basis for running.”

And lest you forget, this was all happening 50 years ago. Maybe the innocence is long gone, but I would like to think that the optimism and compassion are still there for millions of boomers.