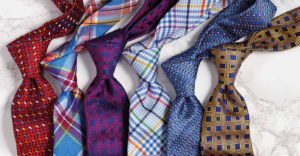 Men are wearing sportcoats, even suits, but with open-collared shirts. Old men, young men, middle-aged men — clear majorities of men in all age groups are tieless.

That’s particularly surprising in my little corner of the world. My Teeny Tiny Law Office is located in a building pretty much crawling with lawyers. There are lawyers everywhere around me, presumably, but very few of them are sporting ties.

Of course, I’m not wearing a tie today either. Truth to tell, I only wore a tie on Monday because I had to go to court. With the sole exception of one judge, since retired, I can’t imagine a male lawyer deliberately going to court without a tie.

Of course, accidents do happen. I came to work once, some years ago, wearing a flannel shirt — I think I was planning to move boxes or something — only to realize, upon arriving at the office, that I’d forgotten a court date. Desperate, I scrounged a jacket from a colleague — he was shorter than me, and thinner, so the jacket had no chance of buttoning and the sleeves came only about three quarters of the way down my arm — but at least I didn’t feel completely naked when I approached the bench. The judge — with whom I’d been friendly when she was a privatus like me (we’d had some cases together) — regarded me with exasperation: “Really, Curmudgeon? Flannel?”

But those kinds of accidents don’t happen if one comes to work dressed in the uniform of the profession — that is, wearing a jacket and tie. And it really was unusual for me to come downtown without both.

But that was then.

If this tieless look among professional men is a trend, and I think it is, what accounts for it? A few years back, I noticed that President Obama didn’t always wear a tie, even while giving speeches. In the 2016 presidential primaries, it occurred to me that a lot of candidates were campaigning without neckties. I guess the idea was to appear more a ‘Man of the People.’

Donald Trump, on the other hand, always seems to be wearing a necktie. Tied too long, but always on.

Oh, Lord, this can’t be a political thing can it?

Please tell me that the disappearing necktie is an American phenomenon — not just a Blue State thing.

Curmudgeon is a self-described dinosaur — an Ozzie and Harriet person living in an Ozzy and Sharon world. And sometimes it confuses the heck out of him. He writes a very amusing blog at Second Effort.