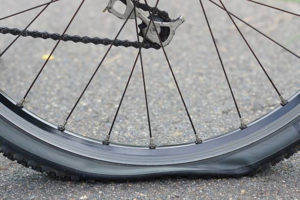 The beer-bike race is a campus tradition that takes place just prior to spring break, when the end of the year is in sight and the Houston weather is begging you to be outdoors. Just barely interested in my freshman courses, I was eager to participate as one of the riders representing our dorm.

The event had been around since the introduction of the Schlitz 16-ounce beer can in the 1950’s. Each team fielded ten drinkers and ten riders. The tops of the cans were cut out for increased speed, but drinking that much beer in a hurry takes practice, and our team worked at it in the weeks leading up to the race. Somebody was always pushing the envelope for a personal best time.

The spectacle began with a gunshot, heads were thrown back, and representatives each drained a can of beer. Then a teammate would ride full-throttle into the first of the 90 degree turns required to circumnavigate the campus.

At the end of each lap, burly teammates would stand ready to jerk the exhausted rider off the bike, another teammate chugged another beer, while a new rider jumped on for the next lap. And so it did continue, the spectators screaming for their favorites, and the crashes were part of the entertainment. I was the first rider on our squad, and I managed to finish the course with a small lead.

We had chosen a student to ride the last leg for all the right reasons. Robert was almost 7 feet tall and had been captain of the football team that played in the Sugar Bowl. He was also a Rhodes Scholar and a serious competitor.

He was pulling away from the pack and only fifty yards from winning the race when the front tire blew out and sent him sprawling across the asphalt. He was hurt, but not so badly that he couldn’t pick up the demolished bicycle and carry it with him as he hobbled for the finish line still in first place.

That was a proud moment for the team and a good enough excuse to party like it was 1961. There was a young new President in the White House, Ricky Nelson sang “Hello, Mary Lou,” I had a girlfriend visiting for the weekend, and only a few people knew at that point what was about to happen to the country, to the music, or to the tradition.